A Lesson In Misdirection: Holder Blames Iran For Terror Plot 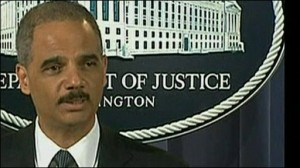 A Simple Message With Simple Solutions: Don't Be Dumb America