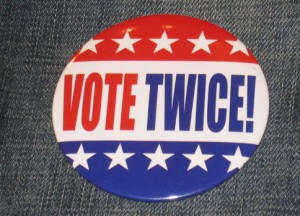 Next year another completely fraudulent Presidential election will take place. From coast to coast secret agencies will reprogram the vote counts in machines that are simple to hack, while other branches from the same faction will manipulate paper votes until their sanitized candidates get the minimum votes to win. Bankers in Europe will toast another round of completely controlled elections in their bastard child known as America. The CEO of the Bilderberg Group will get a bonus check for helping to keep things on track, and another four years of America being the billy club of banking will continue. The children of America will be sold into military slavery and given a badge of “honor” in return for killing innocent indigenous people all the while calling them “insurgents” in their own mind.

The more people who vote, the more we cause problems for them to clean up. However, if we continue to vote for candidates like Rick Perry who have served pharmaceutical companies since birth, and incumbent backstabbers like Barak Obama, the more America and the world will continue to become a horrid place to live, where freedoms are burned at the stake in the name of liberty. What we really need are fresh candidates like Senator Ron Paul or long shots such as Bill Still, both of whom understand the economic enslavement that we’ve been under since 1913 at the latest.

Every single year significant voter fraud is reported by news agencies and mom and pop voting booths from coast to coast, yet the mass media never covers these incidents save perhaps a small mention with absolutely no follow-up. Candidates lie endlessly about how they will “get to the bottom of any voter fraud” and then concede immediately once their pre-planned defeat is announced (see John Kerry campaign of 2004).

How to stop voter fraud

The ultimate golden ticket in stopping this repeated act of treason is to fill every single voter booth, and voter machine pick up station with video cameras. The individuals picking up the machines need to be video taped at every stage in the process until the machines are plugged into the master computer and counted. Any attempt to remove memory chips, drives, or plug anything into the machine other than the end counting software, should be recorded.

Every voting booth area should be analyzed for wireless hacking. This can be done with any device that can sense a wireless network; a cellphone, a laptop, etc. If any newly introduced network is present as part of the machine, this network needs to be shut down, and all voting in that area halted until the network is eliminated.

Take photographs of any and all personnel dropping off and picking up the machines. Get clear face shots, and take photos of their vehicle license plates. If at any point voter fraud is revealed, this evidence will be valuable in a court of law where we’ll put every convicted suspect behind bars for life without the option of parole.

We can defeat this system. The more we fight back, the more they will have to try out new techniques that are not tried and true. This will cause them to make mistakes, and as a result we will catch them. If you work in or around these agencies, do what you can to discover and reveal their tactics of fraud.