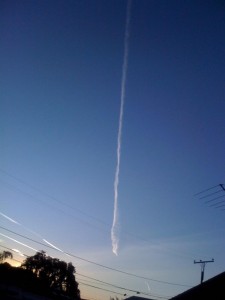 As all of California comes down with sicknesses like a sudden avalanche, the government sponsored geo-engineering from the sky continues to pour down. Today toxic chemical trails or chemtrails are being sprayed from Ventura county to San Diego county. The unassuming public goes about its marry way breathing in this cocktail of genetic altering dust that infuses their bodies with every illness from the household cold to life terminating cancers.

Your elected officials know this is occurring. They are choosing to look the other way while they are sprayed with this deadly substance. They have seen the images of a murdered Maummar Gaddafi and cowardly fear they’ll be next if they save the masses from such nefarious poisons.

We live in an age where coddled baby boomers run our country. An entire generation of people who were “taken care of” by their parents, and now use the government as a symbolic and financial mother goose. They allow others to suffer, because they have a rooted fear in their own demise. 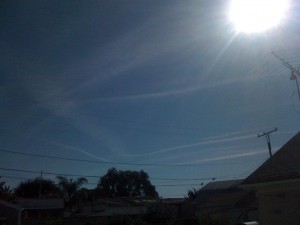 So when you ask yourself why would they do this to you, you need to think about these facts, and understand that they don’t have it in their moral fiber to think of you for a split second. Your election of their office is merely considered a helping hand to save them and their immediate family. You are not in their circle of interest.