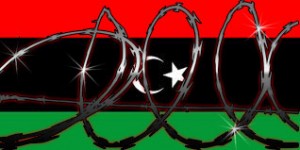 The country of Libya is about to undergo a transformation that will paint the history pages of their schools with a dark era of suffering that will not end until their European captors are stopped. Their financial system is being rewritten to ensure that all their oil and gold is routed through fake currencies controlled by foreign bankers that would just as soon wipe out their entire race, than to share a cent of their gains.

The rebellious forces that overthrew the government will return to their mundane jobs of being powerless citizens as everything their forefathers fought for is burned at the stake in the name of “democracy” that is merely a word for act of the few ruling the many.

What has taken 20 years to accomplish with Iraq took place in less than a year. The unlawful President of the United States of America has wasted no time in congratulating himself for maiming innocent men, women, and children with horrific wounds as he claimed personal victory in the name of peace. Obama also lied on national television stating that no American troops touched the soil of Libya when we all know that Special Forces teams have already been photographed helping to arrange mercenary groups funded by phantom sources to find Gaddafi and murder him without a trial.

We the people are responsible for these acts of aggression for it is us who have allowed our captors to spread their financial virus to others. We must prevent this epidemic of enslavement from overtaking the world, for if it continues, we will have no where to run when the ignorant employees of these controllers lock down the remaining freedoms we have.

Toxins In Your Trick Or Treat Bag
Previous post