Mission To Mars: The Picture Business 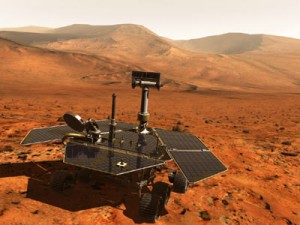 CG Image Of Rover On Mars

So you think we have probes on Mars do you? What would give you that idea? Oh right, pictures. Pictures of Mars. Pictures that pale in comparison to fictional creations handed down by Hollywood every year. What if we told you that one of the best ways to hide billions of dollars of tax payer capital was to fake missions to other planets, and simply show the public images that would make them think otherwise. Well that’s what we’re suggesting.

There is a company that sells missions to other planets. They most likely began with a very legitimate service and during the 1960s began the process of forging interplanetary landings in exchange for huge pay outs that were redirected to nefarious projects that have put so many satellites in orbit around Earth that we have a space junk problem to deal with.

You might find it interesting to note that the top special effects programmers from Hollywood starting as early as 1980 took jobs at this company with the sole task of creating software to simulate the landscapes on artificial planets. We have spoken directly with these individuals and have ascertained that they, perhaps unknowingly, gave the organization its budding key to faking missions for the next several decades. We all know now that computer generated software has no limits in the ability to deceive the eye, especially when it comes to landscapes that lack any organic matter. It is also safe to say that missions, especially those to Mars, also contain normal photography taken here on planet Earth.

The missions are created as such: first the goal of the mission is determined. A rover or other craft is selected depending on the destination, and the mission choreography is laid out and reviewed. This includes where the rover will land, how the events will unfold, what discoveries they are willing to risk against possible real missions at a later date, although they largely don’t care, since they know they will be long gone when the real missions occur.

Once the mission is planned from start to finish, images are determined. Landscapes are planned. Close up pictures of drilling, and soil samples are listed. A determination of a fake or real source is made, and a very special staff goes about creating the environments that will feed these images back to a unknowing staff that operates a remote control interface to a rover that doesn’t actually exist on the target planet. Individuals adjust cameras, control the simulated positioning of the rover, and all image capturing is created either by simulated software that is then fed back to central control, or real images from hand staged props here on Earth are coordinated in a similar way.

The real concern is in where the money goes. Satellites are launched year round, some containing imaging equipment to take photographs of the ground, and others contain weapons to dominate the low orbital space that controls who attacks who using missile technology. Very soon after 9/11, it was released that the United States government has in orbit directed energy weapons that Donald Rumsfeld claimed they would only use if necessary. These technologies could be launched right under the nose of a unknowing public. What looks like a Mars bound rover, could easily be a disguised low orbit weapon. We don’t get to see the journey to Mars. We get to see the launch. We don’t get to see the landing sequence, we only get the images once the rocket has deployed. We’re sure having read this article, they will suddenly enhance their tactics.

Let’s also not forget the ridiculous mission where metrics was not converted to standard, and thus crashed into the surface. Understanding even a basic level of Quality Assurance, we guarantee that this was only a cover story, and we speculate based on our research that it was due to a lack of images that could be convincingly sold to the public.

Be aware that things are not as you think. Billions are being funneled into black projects every minute of every day. Innocent people are being duped, and will go to their deathbed swearing that their honor is real. We sympathize with their struggle however unreal it might be.