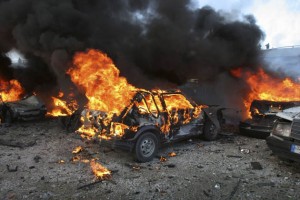 This will come as no surprise to many folks in the military, but there are soldiers in this world who orchestrate faceless bombings to be blamed on the nearest faction of descent. When a banking cartel wants to overthrow a country, or a government wants to give their citizens the rationale for invading opposing nations, bombs are often used as generic mechanisms to sway the public just like dogs herd sheep.

The ongoing Middle Eastern bombings are most likely being orchestrated by factions that benefit from regional chaos. In the area of Syria, Iraq, Afghanistan, Egypt, and Yemen, there are clear banking connections that need this sovereign geopolitical area to stay at odds with itself. It also needs to fuel hatred here in America where parents rationalize sending their children to die in senseless wars.

We want to encourage you to cease believing in these fictitious claims of being Al Qaeda or Taliban or some other local rebellious forces. No country wants to be in unrest. No parent wants to worry about whether or not their child will get to school in one piece. Citizens may dislike their leaders, but there are few regions in the Middle East under such repression that weapons of last resort such as killing innocent people would be used at this stage.

Don’t believe tales of self-inflicted chaos. Even if videos hit the internet showing individuals who’ve been duped into driving a bomb into a building for religious rewards, please understand the likelihood that a small financial promise has fueled their willingness to sacrifice their lives. The Middle East isn’t winning the war by killing themselves. Bombing within Iraq and Afghanistan usually leads to the cover story that American soldiers need to stay to help keep the peace.

It’s time to end this Eurasian Viet Nam. Roll your eyes the next time you see this pattern of deception.

Voter Fraud, How Elections Are Stolen