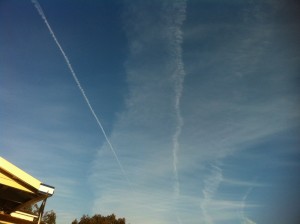 Sky Crimes kick off for the Fall Season!

On August 29th, 2012, the campaign to reduce population through aerial spraying re-launched with a vengeance. Instantaneously the population of America erupted with respiratory illnesses. The pharmaceutical companies began enjoying the yearly surge of antibiotics, cold, and flu medicines flying off the shelves. Unlike previous years, the schedule has been pushed up and the risk of GeoEngineers being exposed has increased dramatically. The population has now coined a phrase to make it all better, the “Summer Cold.” Now here we are on the Fall Equinox, and our eugenic friends have taken it upon themselves to spray massive quantities of poison all over Southern California.

Each year members of our writing staff come down with the chemtrail illnesses as soon as spraying begins. Each time we are forced to visit our physicians, and purchase antibiotics in order to chase away the infections. With each visit we engage in conversations regarding the cause of the illness. We secretly scrape all the theories that doctors use to rationalize these sudden outbreaks.

This year we had an interesting conversation with a doctor that admitted he couldn’t understand the cause for this late summer cold explosion. He sat there struggling to explain that it wasn’t flu season, nor was there any surge in pollen that should have caused his clinic to fill with sick patients. When we suggest that it might be the aerosol spraying outside that started a few days back, we suddenly see an educated man with a PhD turn his head like a curious puppy, and make the connection.

We bring you this story to ensure that you do your part to educate your physicians who have the vocational ability to do their own research, study the patterns of spraying, and make the connections. Physicians have money, attend conferences, and usually contain ethics rooted in saving humanity. You might also try policemen, soldiers, preachers, and anyone else that communes with large groups, who have charters to protect and serve. Eventually, the masses will wake up, and the perpetrators will be hung.

Recently we promoted a chemtrail documentary “Why in the world are they spraying?” However littered with great insights and observations, we have later determined that misguided theories have been sadly embedded within. One is the systematic alteration of weather. If one lives in an area of the world with weather conditions, this theory will seem 100% plausible. However, as we’ve mentioned several times in our articles, living in Southern California eliminates this theory to its core.

Southern California is known for its consistent lack of weather. We live in a temperate zone that enjoys 72 degree days with no clouds nearly year round. For those of you who have never lived here, you need to understand that rain is consistently sparse, forcing us to get our water from either the Colorado River, or Northern California reservoirs.

We believe the constant spraying of Southern California is proof that the intent is to make us ill, and promote life shortening sicknesses. If there is any truth to the plastic fiber evidence discovered in New Mexico, we might just be inhaling biological material that could be changing our DNA.

People Are Waking Up

There was a ray of hope however, as one of our staff members, standing at a gas station and pointing his camera to the sky, heard a woman yell from across the street:

“What in the world are they spraying?”

“Barium Oxide!” He called back. “And other biological weapons!”

“You know it!” the awake citizen replied with a vigorous thumbs up, and she drove off.

So, others are waking up. It is our hope that OnePageNews is assisting in the global awakening to the horrendous agenda unfolding before us. As the fall aerosol campaign gets underway, stop anyone; a stranger, a friend, and ask them to just look up.

Take Photos And Send Them To OnePageNews

At a minimum continue taking photographs and send them to OnePageNews. We will share your photos with our readers as they come in. Please know that any photos need to capture trails at their earliest stage. We know what a chemtrail looks like after 30 minutes, but new comers might confuse such photos with normal cloud cover and fail to grasp the severity of the situation. Also, any photos that contain personal identification information such as license plates will need to be edited by our staff before posting. Try to avoid house numbers, and commercial building brands and information.

Above all, keep taking photos! Eventually our collection of dated and located images will lead to the capture and arrest of all members who are participating in this deadly assault on mankind.