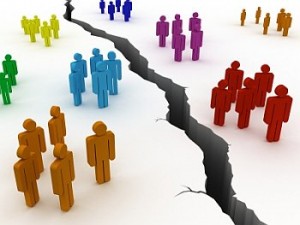 Have you ever questioned why mankind can’t come together and unite against what we know is wrong? We would like to take a moment to shine a light on what is really going on to keep mankind divided against himself.

Many of us joke about ever attaining world peace in our time. We would like to suggest that world peace is already here, but that factions working against us have simulated events and beliefs to make sure we stay at odds with one another. Now before blaming a controlling elite, we need to take responsibility for our own divides. There are many methods by which man creates reasons to hate one another. We think the lowest common denominators are religion, sports, and politics.

Regardless of what you believe, it is common to feel that you have it right and everyone else has it wrong. Regardless if you belief system ever accurately predicts the future or improves your life, you usually carry forward the teachings handed down by your parents without questioning or investigating any of it. As a result of putting your foot down on a belief system relating to a creator, you will in most cases exclude the majority of your fellow-man, and awake each day pitying their misguided existence.

One of the most arbitrary of the divides is sports. A citizen of the world is born in a geographical area, and attaches to a name brand team for no better reason than a proximity to a location. For the rest of their life, they will senselessly worship the successes and failures of this team made up of people from all around the world who are willing to play for the “right” amount of money. The geographical team has little to no association with the town or city it is located, yet the fans continually overlook this fact in order to point across the stadium, bar, or street and hate or divide against their neighbor. There is a reason why sports are fueled. From the days of the great Roman Empire that used sporting events to distract the people, today it is not only a distraction but a further method to ensure that any cohesive unity between man within a particular country, continent, or world is impossible.

There used to be a time when politics were managed by real citizens who cared for the people and who were made from the same incomes and households as the normal citizens. Today as we know we protect the corrupt by catchphrases such as “Well all politicians are corrupt.” This relief valve of tolerance for a group of corrupt individuals allows the total lack of representation to continue to exist. Within our own communities we have individual citizens who are duped into joining a political group. This need to join is driven by man’s genetic fear of being outside the tribe. From observation alone over the past 10 years, we now have conclusive evidence that in America at least, the Republicans and Democrats are the same party, and even with this evidence, the citizens of America continue to battle across fictitious party lines hating one another and engaging in the divide.

Where do we get our concepts of discontent? Where did our fathers and mothers get their impressions of hatred and fear? In times past, there were wars led by greed to expand empires, steal treasures, and to feed the single ego of a commander or leader. Today, we have lost virtually all of these greed filled conquests. We say “we” excluding the hopes and dreams of those who own the banking cartels. We say “we” excluding those who live in realities that attempt to portray Hollywood Scarface heroes looking to sell drugs and live in a constant state of isolation under the veil of freedom.

The race wars are kept alive by the constant pounding of media blitzes that drive home ancient tales of black against white, Jew against Arab, Russia against America, etc. Right now multinational corporations engage in war designs. They take the objectives of the elite and design wars that will rationalize attacks from one country on another all the while convincing a population that a true threat exists or at a minimum the asinine catchphrase “A war economy is a good economy.” The truth is that no one wants to attack anyone, and those that profess they do are those who can be easily evaluated as mass-media driven intellects.

Letting Go Of The Systems

The solution to world peace is in letting go of the need to latch onto tribal lines. Sit in a shelter with your neighbor during a storm and see if religion, or sports, or politics becomes a problem. It won’t. See if race or fake stories of boogeymen like Al Qaeda matter. They won’t. Looking into the eyes of a person in need will strip away the fictional lack of tolerance handed down from our ancestors, and the elite controlled media and military. It has been said that there is nothing to gain from war, but to return to what you once had having lost a slice of your life forever.

Letting Go Of The Mass Media

How do you form your picture of reality each day? Where do you go? Who do you listen to? Who do they listen to? Do you travel the world and talk to people who live in the countries that you have solid opinions about? Do you think an average United States Soldier gets to know the people that they wholesale slaughter? They don’t, and you don’t. If you haven’t already, you need to disengage from all mass-media products. Go if you need to entertain yourself, or if you understand the level of propaganda being projected at your life, but until you have this filter well-developed, we suggest you let go entirely for an extended period of time.

Let your mind solidify the reality around you. Get to know your own beliefs by listening to the voices and instincts inside yourself. Study your opinions of God, or the love you have for your fellow-man. Try to overlook the exceptions of hatred for the average frequency of goodness in others. We assure you it is there. Peace is all around us. We urge you to let go of the energy you expend on a daily basis when trying to uphold other people’s beliefs.

Once we re-engineer the world to prefer peace over fear, those who are peddling their wares of war and hatred will stand out like a sore thumb. This is when we detain them with our 2nd Amendment rights as handed down by our forefathers. The only obstacle in the way of world peace is a lack of spreading information as presented in this article. Start the process. Spread the word.