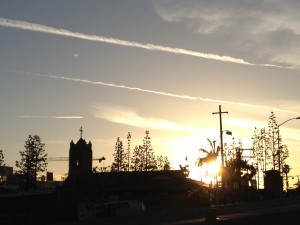 As sunny Southern California enjoys its first warm weekend in nearly four months, the treasonous scumbags that believe that man is a plague on this planet have loaded up their chemical laden planes and dumped several metric tons on the people. Deploying from what appears to be San Diego California, a warm sky incapable of manifesting contrails has been painted all day with aluminum and barium oxide. The unsuspecting sheep below visit beaches, parks, and enjoy deadly poisons during their family BBQs.

Outside of GMO foods, chemtrails are the nearest conspiracy that is about to break wide open. We deserve clean air. They aren’t just trying to modify our weather. They are trying to kill us. They are trying to force us into their hospitals to take their mercury filled vaccines get well. You aren’t getting sick because of random germs or viruses. You are breathing in their concoctions, and developing very specific ailments.

It’s time to cease worrying about what others think of you, and start spreading the word.

How Wealth Is Distributed In America