Earth’s Expansion Since The Dinosaurs

There has been a panic lately about the recent increase in earthquakes and the sudden coverage of sinkholes around the world. The science behind this is very simple to understand, but hidden from view due to its link with the creation of crude oil that controls the value of all our fiat currency.

The answer is simple, the Earth expands, and the reaction is that the surface shakes when it pulls apart, and creates sinkholes that eventually fill in naturally.

Ever wonder why mountains are these giant colossal formations that tower over our heads, and yet the plates that make them are slanting land masses that pierce the crust of the Earth? This is because they used to be at ground level before the Earth expanded, they became the highland. If one travels to the American Southwest, one can see legacy structures that once held up the sea level of Earth. The further you travel towards the North, you can start to see where these same mountainous formations lost their side support, and tipped over leaving them at slanted angles. 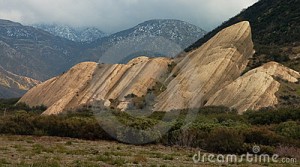 Sinkholes are the earliest versions of expansion phases. The caverns below that have been adjusting slowly over time have lost their support, and eventually give away in a “hole” appearance. This hole appearance is not unlike the grains of sand in an hourglass. A single point loses its integrity, and thus causes a single point above to start caving in. Overtime this distributes perfectly into a circular hole.

The reality is that sinkholes don’t happen overnight. They happen over long periods of time while we travel on the surface above. Once they have reached their critical lack of support, the surface caves in. It is dramatic and scary for those on the surface, but it is merely a normal process of all planets orbiting a hydrogen star.

Read our article on how planets are born, die, and why it matters for the details behind why the Earth expands.

The Stock Market: It's Not Chaos