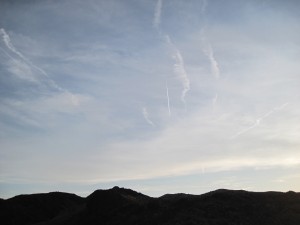 On May 13th, 2013, Lake Havasu saw absolutely no trails in the sky. Commuter planes flew overhead leaving behind 15 second contrails that quickly vanished as they should. One day later, on May 14th, 2013, Lake Havasu experienced a constant barrage of chemical trails sprayed from the back of highly orchestrated planes. In the sky they constructed a giant multilayered cloud.

Exactly 24 hours later, Northern Texas experienced a deadly weather system that contained several tornadoes that left six dead, 37 injured, and over a 100 homes damaged. The storm produced grapefruit sized hail, and produced a funnel over a mile wide according to eyewitnesses on the ground.

This is exactly why we have to halt the tax payer subsidized killing of our environment and population. Elitist psychopaths are using our money to poison our air, control our weather, and kill our crops. It needs to end. We need more people to blow the whistle on this nefarious feedback loop of corruption.

Chemtrail Update: Why It Matters

Look Up! New Documentary On Chemtrail With iOS App To Track The Criminals
Previous post