Posts in the News category

Anyone who lies to promote war on false pretenses should be jailed for life.

Israel Will Get Its Border Building Money

While the United States Congress cuts American unemployment benefits after just six months, Israel is going to be rewarded with billions in aid by lobbying around the sequestering funding cuts aimed at the citizens. We don’t subscribe to much of the anti-jew rhetoric online, but this manipulation of US funding is despicable and ultimately falls on the shoulders of United States politicians.

And let us not forget the double-talking politicians who lobby against building a fence along the border of Mexico, but wholeheartedly fund the ultimate destruction of Palestine using 30 foot tall concrete prison walls.

These are the desperate measures necessary when you make your food out of shit.

This is why your neighbor sounds like an idiot.

Lt. Col. Thomas Bearden:
A Lucid View Of The Elite And Science

Rod Serling, inventor of the Twilight Zone, battled with the editors of broadcast television and sponsors throughout his career. In this rare interview, Rod reveals the debuting method of pre-censoring writers by merely refusing to hire anyone who had aspirations of educating man to his own tyrannical constraints. 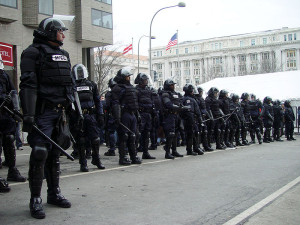 Katy Perry has added her assistance to the New World Order by reacting to more government staged shootings in America. While police are seen raiding homes and violating Constitutional Rights of citizens in Boston, Katy’s Twitter account was filled with auto-tuned drivel. The government and PR firms working for the government know how the system works; stage a killing or randomly promote one to the front-line news, then wait for 80 IQ bimbos to translate those losses into self-righteous outbursts of moronic fodder.

The facts remain, gun ownership at the citizen level keeps neighborhoods safe, and standing armies in check. An armed man is a free man. An unarmed man is a slave.

Step Right Up!
Get Your Anti-Tyranny Ammo!

Should anyone attempt to impede your Constitutional Rights, introduce them to the G2 RIP Patents.

Was he a Manchurian Candidate?

Nigel Farage is the single most consistent political candidate in the last several decades. Unlike the “run for cover” Ron Paul who couldn’t stick to his guns for more than a pre-election interview, Nigel has stood toe-to-toe with the minions of the Elite and told them flat-out to shove the European Union up their backsides. We salute every molecule of his being, and hope to see him running Great Britain in the coming months.

The Trajectory Of American Tyranny

Pray that sports trivia and obesity get you out of detention centers.

The NSA Tactics Are Ancient And Many

Judge Napolitano: A Nation of Sheep