Posts in the conditioning category

What Will Be Our Christmas Surprise? 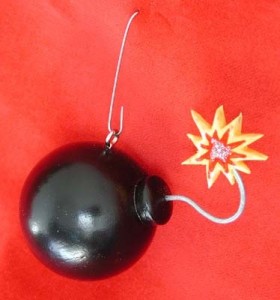 For the last decade, the events of 9/11 have been used to rationalize the advancement of tyranny over the previously sovereign and free. Each year we endure new fictional false flag operations that convince the ignorant sports worshiping, reality show watching, junk food gorging public to give up their divine freedoms in exchange for safety. We are due for another Christmas surprise: a fictional hand-crafted false flag operation that will condition the public to consent to more Stasi style checkpoints and intrusive TSA groping. Where does it end? A body scanner at the grocery store?

The nefarious corrupt individuals that have infiltrated otherwise upstanding areas of government use the holiday period to terrorize a captive country. They know all we want to to do is get to our family gatherings, and a camaraderie is born among travelers as they share that goal. They know that we’ll converse as a group, and that at least one of our clan will regurgitate the Al-Qaeda action line about phantom, suicidal boogeymen lurking in caves eager to meet their 72 virgins, until the entire gathering is riddled with unfounded fear and frustration.

Right after 9/11 homeless drifter Richard Reid boarded flight 63 on December 22nd 2001, with shoes that were right out of an Acme catalog suitable for Wile E. Coyote. As the buffoon attempted to light the fuses dangling on the floor, he was apprehended. The story ran like a bad spy novel: this Al-Qaeda operative attempted to ignite plastic explosives in his shoes and bring down an airplane filled with happy holiday travelers. Those Muslim rascals! (As a side note, plastic explosive does not respond to lit fuses. Remember: The media thinks you’re an idiot) This absurd story hit the airwaves at a time when most of us were still under the influence of the mainstream media lie that was 9/11. Immediately the government rushed in to take away our rights to board a plane without first taking off our shoes. This ritual of tyrannical public slave conditioning didn’t stop there.

In August of 2006, the United Kingdom gave America’s captors a gift: the fear of liquid explosives. The establishment thinks we’re so gullible and brain dead that we’ll actually believe that nefarious shadow men are planning to smuggle liquid explosives onto airliners and kill hundreds of people. Now this question bears asking: with American airport security as already tight as it was in 2006, what terrorist organization worth it’s weight in Jihad would consider airplanes as a target…the path of most resistance? The tale is patently absurd and unfounded, yet the media picked it up, repeated the government meme like parrots, and the next thing you know, we’ve been conditioned to be good serfs and show up to the airport with our no more than three ounces of shampoo so the Scary Turban People can’t blow us out of the sky. It’d be laughable if it wasn’t so egregious. It’s a giant con game to see how much asinine regulation we’ll withstand.

On December 25th, 2009, an FBI agent escorted Umar Farouk Abdulmutallab onto Northwest Airline Flight 253, en route from Amsterdam to Detroit Michigan. This was a literal repeat of the Richard Reid scenario, save the location of the never meant to explode “bomb”, this time in the man’s underwear. Waiting anxiously in the wings as the story unfolded was our former head of Homeland Security Michael Chertoff–who had just happened to invest in a little company that makes radioactive body scanners. Once the false flag operation was over, the Department of Homeland Security ruled that all their TSA checkpoints be outfitted with body scanners, and award a non-bid contract worth $173 million for the first order–but the little known fact is that the machines were ordered a year in advance of that. This was all a set up. Aside from the fact that these scanners do cause cancer, the idea that one violation or mishap would lead to an entire nation losing their rights to a healthy entry onto a plane without being groped is ridiculous. Again the mission is clear: incrementalism. Feed the public the Authoritarianism in easily digestible chunks, with dramatic events staged to sell the idea. If the people were so compliant that they would take off their shoes and curtail their hygeine products just so they could engage in commerce with an airline, all the while thinking the Daddystate Government was going to keep them safe, they’d hop right into a microwave oven like a good dog if ordered to do so.

There is a pattern. Corrupt individuals and perhaps organizations are working against the United States to enslave our people with fake attacks that are drummed up in the mass media press and immediately translated into tyrannical restrictions on our freedoms. Think about it: we lose a portion our rights when we enter the airport. Freedom of speech? GONE. Second Amendment? Forget about it. Unlawful search and seizure? GONE. We are being conditioned to accept life as prisoners, as wards of the state, to be compliant with intrusive, degrading, debasing search procedures under the guise of National Security. It’s a goddamn lie, and it’s time to get the word out to everybody that this hoax needs to be exposed…and fervently resisted.

We await this year’s holiday surprise. Nothing like getting a little whiff of tyranny for a Christmas present. If indeed these control freak criminals do execute another fake attack, or perhaps even a real one, look for the signs of fraud. Look beyond the mass media take on who did what and why. Come to this website and we will do our best to inform you about what really happened. Travel well, travel aware. Tell someone you care about what really goes on. This year, give the gift of truth. We are on your side.