Posts in the illegal immigration category

Mexico, You’re Being Had 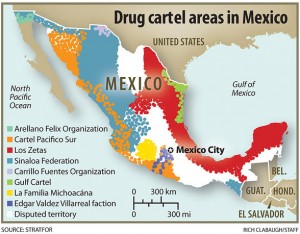 One of the most beautiful regions of the world has been controlled by 39 elitist families for the last one hundred years, and now they are being used as a tool to undermine the backbone of the United States of America. Mexican citizens are being systematically raped of their sovereignty by this same criminal faction.

The story of Mexico’s current elite goes back nearly a century, when the drug cartels of Europe migrated their cocaine production into South America for easier delivery to North America. Mexico was run by a cadre of warlords then, who policed regions of land until the number of rival families/factions was reduced to under 40. Once controlled, Mexico soon became a haven for wild-west outlaws well into the 20th Century.

As these few families rose to power, the gulf between the haves ad have-nots became greater than any other country in the world. Mexico’s political leaders were chosen by these family members, empowered by the Federales, and murdered if they did not follow orders and serve their oligarch masters.

Today Mexico is gripped with third world labor exploitation. Multinational European corporations have moved their American branded companies into Mexico and have bragged openly that the only place to find cheaper labor than China and India is in South America. The cartels that have amassed are fighting a war of wars between each other and sometimes using innocent citizens to illustrate their power and domination. There is a reason the Mexican power structure keeps their citizens unarmed by law….they’re afraid that if you wake up to the con, they’re days are numbered.

The European Formula To Destroy America

America is the biggest threat to European domination worldwide. As long as we own guns, practice to use them, and maintain a fondness for our Constitution, Europe will have an obstacle of mammoth proportions to overcome before they get every country under their thumbs. There are many factors involved in eroding the backbone of America, but Mexican citizens are being duped into losing their country in exchange for diluting ours.

We understand the racial sentiment by suggesting that illegal immigration has its humane reasons, but we would rebut that not taking care of Mexico’s freedoms is the greatest crime of all. ACLU fans never discuss helping Mexico rid itself of nefarious forces that rob its people of freedom, and murder its citizens as if they were cattle. What we hear is the brainwash Ted Kennedy mantra that every illegal should be allowed in America unconditionally. The true solution might surprise those who repeat these notions.

What do you think would happen if you infiltrated a patriotic nation with those who have fled their own country in the face of criminal factions? You would slowly weaken the fabric of the target nation which is America in this scenario. Ever wonder why banks, politicians, and military are allowing illegal immigrants to move into America unfettered? Answer, they are knowingly or unknowingly following the formula to destroy the United States by sifting the weakest non-combative citizens from a country overrun by bullies, and thus destroy the Alpha male population that fought for everything they have including freedom from European tyranny.

After several decades of infiltration where American citizens are forced to speak spanish just to finish core classes, America will be primed to be taken over, and this time, the genius breed that gave us our founding fathers, and the minutemen that defeated the redcoats, will be nowhere to be found. The United States Attorney General Eric Holder funded drug cartels will most certainly wipe out the native families, spreading more uncertainty and chaos. This spills over the border and can be seen very clearly in the state of Arizona.  As Mexico implodes, enter the banks and corporations who will  loan Mexico billions of dollars for reconstruction, an astronomical sum which will be impossible to pay back, and Mexico will cease to be Mexico, and consequently, America will cease to be America. All part of the North American Union plan.

If you ask most Mexican citizens about their attitude towards the United States, there will come a time in the conversation when they revert back to the historical past wherein the American Southwest was claimed by Mexico.  Indeed the stories are true. European citizens migrated across the lands of North America and stole every ounce of land from the Native Americans, and the cross-bred Mexican/Spanish citizens, who had in turn stole it from the Native Americans. These battles raged on for decades, created historical tales such as The Alamo, and have left the elite with a tool to con the average Mexican citizen into running north to recapture something they will not likely own anytime soon, while their homeland is raped by the same Europeans that stole America. In the end, the Mexican population will be homeless, without ownership of past land, and with only a memory of what it was like to live south of the border. Corporations will exploit the people for slave labor as they already do in China and India, then have the audacity to tax the lifeblood out of families that have lived there for centuries.

A leading organization that keeps this sentiment and resentment alive is La Raza. It is important that if you are a Mexican citizen that you focus back on your homeland and refuse to fall victim to the La Raza hatred toward America that is the bait to keep you out of your homeland. Stay in Mexico and fight the good fight. You live in a country that has everything it needs to succeed, but you’re being sold a lie that you have to engage in the reconquista in order to regain your sovereignty and national pride.  They’re selling you anger under the guise of national pride. This keeps your eye off the prize and you’ll truly lose your country if you’re not careful.

Mexican citizens need to understand the con job that they are being fed. The sovereign land at the border between Mexico and America can be resolved at a later time. Right now the body of Mexico is under attack. The gorgeous lands of Mexico would be under any other circumstances the most sought after vacationing area of the world with the rich Mexican culture providing an ancient history that stands up any nation in this world is being stolen. As we said before: Mexico has everything it needs to succeed.

In our experience, the Mexican citizens are some of the most kind hard working people the world has ever known, and it is this good wholesome nature that is being used as a dagger of good will against them. As times get hard within the borders of Mexico, groups such as La Raza are crafting scapegoat scenarios of rolling over America and taking back lands that were once theirs, when they know good and well that any land added to Mexico’s core would only be swallowed up by the drug cartels, thus causing even more migration north to escape the tyranny. The only solution is to stand and fight. It is your time to own your history, your land, and your culture. There is no reason to go on living as a failed narco-terrorist state.

Sadly America is run by European selected, Bilderberg hired frontmen, so write them off of your list of allies. Mexico is in the middle of the con, and it’s people are being kept in the dark, terrorized by drug dealers, and fed propaganda Stateside by organizations such as La Raza. So where does that leave you, Sons of Mexico? It leaves you with a decision to make: continue down the path that will lead to more chaos, more enslavement, more bodies hanging from bridges, or do what needs to be done and regain the red-blooded warrior spirit that stood against Cortez.