Bashar al-Assad: The Bankers Are Coming! 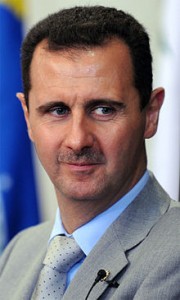 Attention Basha al-Assad, the bankers of Europe are coming for your country. They are going to use the military industrial complex of the United States and the diplomatic maneuvering of the United Kingdom and other allies to force you out of your country. Right now agents are recruiting mercenaries within your borders to overthrow your government in the name of a plastic revolution. Financial Robin Hoods will swoop in and reconstitute your country to serve the IMF and World Bank.

As this hurricane of destruction and black chapter in your country’s history looms towards your borders, it is imperative that you cease playing the game that has been the mode of operation for every top level official in countries for the last century. It is time to blow the whistle on everything you know about the elite, how they function, what your family has done to cooperate with them. If you do not level with the world, they will have the upper hand against you and your people until you are shot in the head by militants that bare Syrian arm bands, but work for the elite. Every leader who has tried to avoid them with status quo tactics has been murdered.

To our fellow Americans, it is crucial that you do not get caught up in the banking heist of Syria. This is not a war for democracy. This is a war to put more people into the very slavery that we stand against. We are captives of the European banking cartels, because we have grown lax in our knowledge of how money is created and manipulated by them to hobble our social mobility in the world. Do not allow your children to be sacrificed into more bloodshed that has nothing to do with freedom or defending the borders of America.

To our European neighbors, the elite live in your backyards. Their banks are on your soil. You allow them to travel to work everyday without interference. Save the planet, and remove them from existence. Outlaw their business tactics at the core of your country’s constitutions. Try them for crimes against man, and hold them accountable for the hundreds of millions of citizens who have died under their hand crafted wars. You will not need but a single compound to house their solitary confinement. Once you kill the head of the snake, we will kill the body that extends into our region, but without your initiative the body will continue to grow back.

To Bashar al-Assad, we may not agree with your family’s reign over Syria, but we do not believe that a foreign body, or our citizens have the right or authority to remove you from office. You in particular have the chance to make things right amongst your people. If you allow yourself to be manipulated into defiant stances without divulging the truth about the world and its elite, you will suffer the same fate as Saddam Hussein, and Maummar Gaddafi. The choice is yours. We eagerly await your decision.