Posts in the the obama deception category

A Brief Summary of Recent Events

Kind of a bend in the road from the usual fare we post here, but, since it IS a holiday, we’ll refrain from laying it on terribly heavy…but still make sure the message is heard. Take a minute in between helpings, and have a listen. Who knows…this video might be a good way to give someone you a know a nudge to seek the truth.

And we do suggest you take a look at “The Obama Deception”. 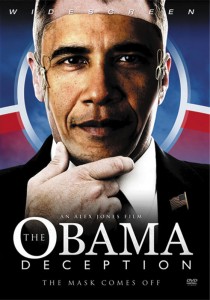 The Obama Deception: The Mask Comes Off

There is something to be said for a master who likes his slave. The bankers of Europe sure love their Obama carrying their agendas forward like a good slave who does what he’s told. Obama has backstabbed any notion of a two party system with his rule by Executive Order, his renewal of the Patriot Act I & II, and of course our favorite act of treason the Military Commissions Act that guts the Bill of Rights, and makes torturing children okay. Did Obama go to Penn State?

The Republican Party facade is being sabotaged once again during this deliberately debacled 2012 election. Absurd criminal candidates like Herman Cain and Rick Perry are being thrust to the front lines while straw poll front runner Ron Paul can’t get his face on the front of a magazine or newspaper to save his soul.

The secret agents of the Bilderberg Group are doing a great job at controlling this bull known as freedom from breaking out of the barn, but not for long. Now that the Occupy movement has been completely co-opted, it is time to devise a different tactic for spreading our word, and we think the best way is good old fashion word of mouth.

Make the prediction that we’re going to see more and more dilution on the side that is said to be the Republican party. More worthless long shots will be pushed up to the front row who have shown their cartel banking and pharmaceutical masters that they have no morals, and will drug America into the next Brave New World. Cain serves the bankers directly, and now has lied to the entire planet about his sexual misconduct. Rick Perry wears jackets lined with big vaccine injections for all those who vote for him. All the while Ron Paul says whats on everyone’s mind, wins all the straw polls, and has every victory ignored by the press.

Wake up America. The 2012 election is simply a repeat of last election. Obama is one of them. Ron Paul is not.