Posts in the war crime category 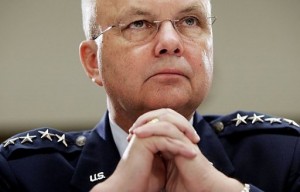 The recent PR campaign by former CIA Director Michael Hayden to drum up more propaganda against Iran should read as text book as it gets. Somehow the retirement factor is being pushed on the public as a characteristic of truth. Iran is not the single greatest threat. Our own politicians are the single greatest threat. Our illegally elected President just signed into power the National Defense Authorization Act, and completely unconstitutional bill that enables compartmentalized goons within our military and intelligence agencies to detain American citizens without due process.

Now we don’t want to suggest that a person lose their write to dislike another human being, but what we do oppose is the mass media and or military act of injecting lies into the public to manipulate them into sending their children to die for banking cartel objectives. This is exactly what former CIA Director Hayden has done with his recent statements about Iran.

For those of you who are geographically impaired, let us remind you of a few things. Iran is on the other side of the planet. Iran does not have nuclear weapons despite the many claims by the “weapons of mass destruction” liars in government. Iran has something the bankers in Europe cannot stand, FREEDOM. Iran is a sovereign country, and they can’t stand the fact they don’t control them. This entire smearing campaign against Iran is to gain support from an unknowing America public (not European mind you) to support sacrificing our kids into the meat grinder. Hayden has decided somewhere in his life to exchange dignity for status. He is aiding the criminal act of lying about another country. For each soldier that dies or is injured attempting to attack Iran and her citizens, Hayden must be held for war crimes at that time.

We want you to see this pattern before it costs you someone you love. As long as our military is being used as the billy club of European bankers, we must withdraw our children from this organization. We must refuse to kill indigenous people all the while calling them insurgents. If you know someone who has died, or been injured, you are looking at a person who has paid the ultimate price for a bank’s profit margin and control. Spread this pattern of deception to all you know.