Inquisition 2.0: Spying On Your Neighbor Is Not Trendy, It’s Treason 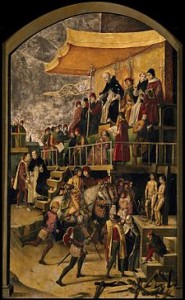 For those of you not familiar with the Inquisition as it occurred from the 12th century to the 16th century, it is valuable to recap the overall purpose and method of this era, for it is being resurrected by the government to heard a population into fearful citizens who will mindlessly turn in their neighbor for false claims in hopes that they themselves will go unnoticed.

There was a time when the Roman Empire under the new rule of the Roman Catholic Church devised a method of quietly waging war on the public and any neighboring nation that did not follow their newly invented religion of Christianity. The goal was to gain rule over all of whom they did not control. It also reflected the new power structure from Roman politicians to religious commanders who exchanged a life of fake belief for a position at the top of the power grid within Rome.

The plan was simple, the Roman Catholic Church was not allowed to break the law. Yet, they wanted out of greed to control the entire planet starting first with their immediate region of Europe. They did not have the power to demand that armies scour the lands and force people to believe, so they instigated a careful plan to hire mercenaries to break the law on their behalf.

These hired hands rounded up individuals and paraded them in front of appointed religious authorities to swear under oath that they not only believed in Christ, but were going to remain loyal to the Catholic Church. Of course, most people caved into their odd demands and went about their merry way. Then came the individuals who stood up for their beliefs. They refused to be forced by other men, who deemed themselves higher than normal man, and refuted the belief in Christ. Once this refusal to succumb to the spiritual invasion on the human mind was found, the public displays of punishment drove deep psychological terror into the minds of the citizens who were yet to be tried for their beliefs.

Individuals were tortured publicly by every means known to man. Subjects were beheaded, burned at the stake, whipped, mutilated, etc. The remaining citizens desperately wanting to avoid such torture began to divert attention from their own lives by accusing their neighbors of crimes against the church. Often these accusations were entirely made up, and baseless, but that didn’t stop the church from dispatching their mercenary army to snatch these poor innocent people to be immediately questioned as if they were guilty of the accusation.

Today, we are seeing a rebirth of this Inquisition stage to society. We are seeing our government and Department of Homeland Security encourage citizens to spy on one another. To develop suspicions based on fictitious stories of boogeymen that don’t exist. It is important that every citizen of America and the world remember the 400 year campaign of terror that the governments of Europe imposed on their people in order to force taxation by the church on the people for doing nothing more than existing on this planet.

Inquisitions are used to control people by fear. Any organization that suggests for a moment that we should ignore the rights laid down by our Constitution should be dissolved immediately. Spying on your fellow-man is not an act of freedom. Spying on your fellow-man through the eyes of an imaginary accusation is treason on the individual that subscribes to such an act, and is tantamount to convincing a child to commit a crime.

We would like to suggest that you tell on the organizations that would have you ruled by fear. Tell on the individuals who dream up such draconian programs, and refuse to post their materials in your business, or repeat their heretic suggestions on the people. Freedom starts with a commitment from the inner self, and any act that compromises this principle should be routed out and destroyed. Once we remove these fear mongering control freaks from society you will see an inner peace of constructive loving citizens that hasn’t existed for more than 5000 years. Fail to remove them, and a new dark age of covertly funded false flag operations will tear your world apart until you and your families die to the hands of your newly appointed captors.

Refuse to engage in the Inquisition 2.0.