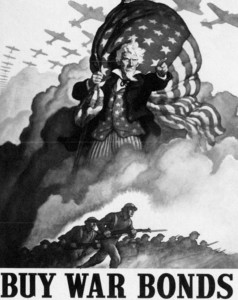 Ever wonder what would happen to you if you were found responsible for starting a war? What about financing a side of a war? It’s safe to say that starting war in peaceful times by any means would be considered an illegal action towards humanity. Nevertheless, banks do this everyday, and no one complains.

Wars are expensive endeavors, and require mountains of money to plan, execute, and complete. In many cases a war is an investment that has no guaranteed end, and thus constitutes a bad investment at face value. When a person invests they are looking for a return of that money, plus some interest at a minimum. Yet every minute of every day, world banks are investing in wars by loaning countries money to feed soldiers, make weapons, and rebuild the destructive paths in their wake. Clearly a war does not pay dividends to its shareholders. It does not create a product that is marketed to the world masses to generate a return. War is simply war. And the marching minutes of a war grind every dollar of investment through mega corporations that profit from the dispute in question.

Every war serves an elite agenda. When we say war, we are not talking about gorilla conflicts in the Kongo. We’re speaking of national press events that involve tens of billions of dollars, and hundreds of thousands of troops deploying into foreign soil. As we mentioned before, many wars are fought to take over currency creation and management. As Eurasian countries fall to the invading powers of the United States of America, their countries are quickly infiltrated by preselected politicians and carefully put in place by IMF agents that offer prosperity in the form of loans. These loans are structured in such a way that the newly indoctrinated country can never pay them back. The reason these ludicrous agreements are signed is that the individuals holding the pen are newly appointed shills who have already agreed to turn over the sovereign land to the banks in exchange for short-term monetary gains.

For the countries that are duped into fighting the wars, there is debt. Debt that can never be paid back. World War II had at least one objective for the United States, to force America into immortal debt. America had already seen its most wealthy robbed during the roaring twenties, and its middle-class raped during a ten year depression. The final deathblow from the elite banking cartel of Europe was to push the country herself into crushing financial obligations that she could never recover from. For each war that America participates in drives her into debt that can never be paid back. When we say never, we mean never. Every dollar of American money is actually the property of the private for profit bank known as the Federal Reserve. Each paper unit says in bold writing at the top “Federal Reserve Note.” It should say “United States Note,” but that would mean we the people own the money and control its supply, which we don’t. Because of this tiny little fact, every dollar created or loaned during war comes with an interest baring agreement known as a bond. This interest is impossible to pay back, because the interest is never created, and thus you have the ponzi scheme of the elite money system.

Enabling wars simply to gain profit should be a crime at the highest level. Yet in the international banking world it is legal to invest in both sides of a war. The fact remains that without funding a country would be forced to work things out peacefully. Their only recourse would be the infinite supply of borrowed money. Remove the money, and you prevent the conflict. Most countries have armies, but even with significant forces and weaponry, it takes a steady flow of money to activate troops and replenish ammunition. Without banks wars would be “all in” acts of aggression. Countries would deplete their resources and thus make themselves vulnerable to attack.

As you live your daily lives and have to endure the constant barrage of war time media, keep in the back of your head that everything you see is being financed by a group of people who have gained all their wealth and continue to gain their wealth exclusively from the suffering of others. If you have a family member who has been injured or mortally wounded, keep in mind that bankers legally benefit from your loss.

Your enemy isn’t a politician, or a political party. It’s a banker. It’s the individuals who own the banks who manipulate the world to remove all sovereign laws and previsions. Time to change your focus to the fraud that is fiat currency. Time to move your investments into tangible assets they don’t control.