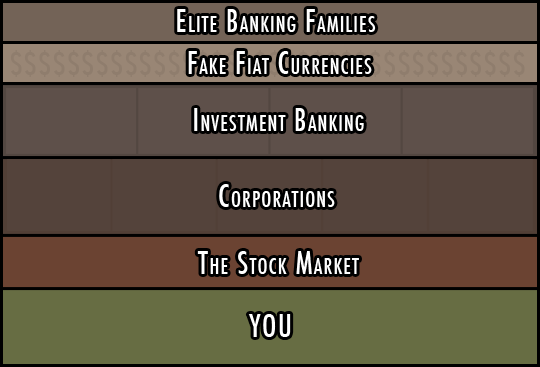 For those of you who haven’t attended a school of economics, the existence and mechanism of the stock market will largely remain a paradigm of chaos and disorder. All investors look as if they are making bets tantamount to gambling, and winning and losing to the same degree as a colleague who recently went to Vegas. The reality is that money is never handled in a “random” or “chaotic” way. Money is controlled from the moment it enters the economy, until it is re-accumulated by its creators.

Unless you’ve been under a rock for the last decade of internet consciousness, you’ll know by now that our money is fake or fiat. This means that nothing of real value backs or limits the value of money, and therefore its supply is unregulated in large part, except to enslave countries through propaganda based wars.

In the United States money is created in computers under the ownership by our controllers in Europe. The private for profit bank known as the Federal Reserve is the proxy criminal organization that was setup in 1913 to infiltrate America and place the final dagger in her back. The American people “borrow” money from the Federal Reserve at interest that is impossible to pay back, because the money that would need to exist to pay the interest is never created.

How Money Is Filtered Into Control

Investment banking is better understood from its inner workings. Their CEOs are compensated not for their successful oversight of investments and their returns, but by doing what they are told to put the money where it was suppose to go, and by hatching investment schemes to bleed the middle class dry. The entire game is about control.

If one ever gets the privilege of going to an ivy league school like Harvard Law for instance, one soon discovers who is running the game. Investment banking houses hire nearly all worthy students prior to their graduation. Starting in their freshman year, the students are jet-set from wherever they are attending school to parties and vacations all to gain their loyalty and to breed in them a need for opulence. Once this insatiable appetite is ingrained, it is near impossible to break away.

The Stock Market, A Peasant’s Chaos

Once invested into corporations, the bets begin. The peasants, that’s us, get to work through something called the stock market to dabble in petty cash until we become wealthy, and this is where we run into investment caps that limit our shares, and inheritance tax that prevents us from giving more than 50% of our wealth to our children. Meanwhile, Lord Rothschild gives every dime to his offspring since he isn’t governed by any laws.

One can argue the sound practices of investing in good companies that make profits, but nothing changes the fact that great companies never see a penny of investment due in large part to the lack of overall goal from the investment banking agendas. The reality is that companies with stocks over $500 are usually companies that don’t want public investors. Any company with a sound intent to generate investment capital would split their stocks down to mortal levels. The truth remains that some corporations are built up by spy agencies like a certain search engine we could name, that don’t want the average public to own and feel entitled to direct, so their stock peaks at $800/share on average.

How We Fix It

There is only one fundamental way to fix this horrific cycle. We must remove the Federal Reserve, and thus the fiat currency coming through from Europe. This secret bank is still 80% unknown in terms of owners and operators. This is criminal. We need a plan to replace our currency and fast. We need to remove a barrel of oil from our way of life and from the value of their fake money. Only then will we be able to develop and release cheap safe environmentally friendly energy alternatives that cost nothing.

Bankers and investment banking employees need to be held criminally responsible for their schemes and elite practices that horde money from the people causing poverty and suffering. It is time we educate our friends in the military and law enforcement to take back our country. In reality it could happen in a day and without a single shot fired (save a banker suicide, which we’re good with).

Do what you can to spread this understanding.