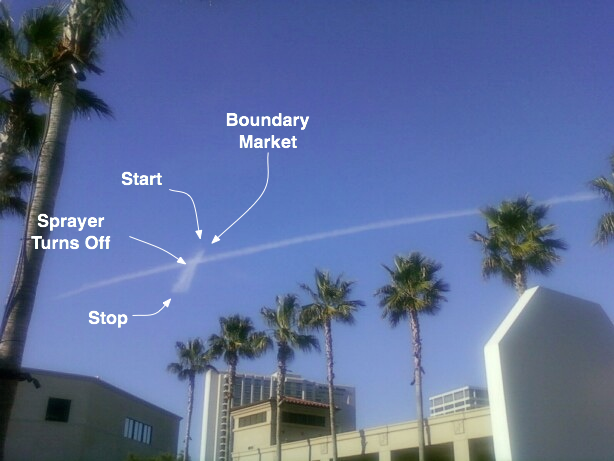 Despite their debut in the late nineties people still have problems paying attention to the sky and noticing the differences from natural cloud creation and Chemtrail dust piles that drift down on the population. We’ve compiled twelve reasons we believe are smoking guns that prove that Chemtrails are indeed manmade, and under all circumstances bad.

The first thing one will notice after taking photos of chemtrails on a daily basis is in how they are sprayed. Normal flights utilize air corridors, which are designated lanes in the sky to exit and approach airports. Chemtrail planes categorically defy these methods of flight and routinely fly either higher or lower than standard commercial aircraft. Chemtrails start and stop abruptly leaving behind line segments that are stitch together with newly emerging trails. Extremely precise T-joints, Z-joints, markers, and grid formations are just some of the methods they use to cover crops and cities. For commercial pilots to intersect in such manners would require that at least one of the planes be in violation of airspace.

Water in the sky has some very key properties. It blocks light. The heavier a cloud becomes, the darker it becomes. If indeed a plane were able to create ice that turned into clouds as we’re seeing with powder based chemtrails, they would coalesce into cumulus clouds and behave like clouds. Chemtrails fall from the sky like dust. The trails remain extremely reflective the entire time, and only at night do they block the setting sun due to their lack of transparent metal nature. Contrails are made from frozen water. Frozen water melts as it falls. Chemtrails are nano-sized metals, and drift down on the population and crops below.

Chemtrails follow a seasonal schedule. We believe this is due to the illnesses that spread beneath their spraying. For instance, in 2010, the spraying stopped on May 15th, and started in September 15th. In 2011, the dates were similar stopping on May 25th, and starting on October 1st. Mothernature does not start and stop weather phenomenons based on a calendar two years in a row. Since the initial publication of this article, summer activity has increased marginally, while winter spraying has increased drastically. Given that no significant increase in air traffic has occurred, there shouldn’t be an increase in trails over populated areas. Yet, it increases daily.

4. chemtrails are not affected by weather temperatures

Contrails are effected by one thing, and that’s temperature. In the Antarctic, contrails have been timed as long as 1:45 seconds. Reporting from Southern California, we have the added benefit of consistently warm weather with dates in December reaching temperatures of 90+ degrees, and still these chemtrails persist. Any ice based crystals caused by contrails would melt away in seconds, and these don’t.

5. chemtrails are full of toxic chemicals not found in clouds

Chemtrails have been found to contain the chemicals Aluminum Oxide and Barium Oxide globally. Contrails are made from frozen water particles.

Chemtrails once sprayed from the back of a plane, expand to volumetric levels hundreds of times their original size unlike contrails that fade in a matter of seconds. Chemtrails can convert a sunny blue sky from horizon to horizon into an overcast day of falling debris. This has never been the case with traditional contrails.

7. chemtrails are passively validated as a shield for global warming

When in the rare case chemtrails are reported on local news networks, they always seem to repeat lies laid out by government agencies, but fail to identify their source. The most common scam is to claim that chemtrails are being sprayed to cool the world against Global Warming. The hilarious nonsense about this claim involves the total lack of spraying when the northern hemisphere is closest to the Sun, better known as summer! There is no campaign to cool the world. The sheer number of planes necessary to accomplish such a task is absurdly huge, and far outside of man’s capability.

During October 1st 2011 when the spraying restarted in Southern California, the amount of strep throat cases skyrocketed. Clinics filled with patients reporting puss covered throats that felt like razor blades. Respiratory illness and reports of asthma attacks increased instantly. The common cold took foot before temperatures fell. We believe that chemtrails might be held until winter to hide the fact that everyone gets ill in direct correlation with their spraying. Regardless, we check with local clinics and monitor the explosion rates directly. You should do the same. As of 2012, the mass media introduced a new catchphrase “summer cold” to cover for the fact that trails are now sprayed throughout the summer months, thus making the population perpetually sick.

As our posse of chemtrail reporters contact us with reports from all over the globe, one fact is clear, the higher the population the higher the spraying. One might assume that air traffic is purely responsible for this surge in air related coverage, and we’re sure it helps, but the sheer number of planes without chemtrails and the ones with contrails almost vanishes in low populated areas save farming communities. Consequently, it is these low populated areas that have bone chilling temperatures well below zero on the surface of the Earth let alone in the sky at ten to thirty thousand feet. Southern California is a hot bed for chemtrail spraying due to its dense population.

The United States government sponsors the daily research into what they call “geoengineering” programs. These programs range from weather manipulation to depopulation programs. They hold conferences in mainstream convention halls around the country, and admit every aspect of the program save one, that they’ve turned the program on. So the only lie that need exist to bathe a population in toxic life stunting chemtrail clouds is the on switch being flipped. We believe we have proof that they have. You should be able to deduce the same with this simple guide.

After speaking with both military and commercial pilots about chemtrails, we were clearly told “It’s not us.” They said the trails are most often sprayed between 10,000 and 30,000 feet to be out of the way of normal flight patterns. The smoking gun they suggested we look into was that no commercial or military airways share perpendicular flight patterns within minutes. This is demonstrated thousands of times daily when chemtrail spraying planes create giant X, T, and Z patterns in the sky.

12. Germany admits to citizens they are spraying chemical trails

The country of Germany has admitted on two public occasions that chemtrails are intentionally being sprayed over the people. In the first case, they admitted it was a “test” military weapon designed to block satellite penetration of enemy intelligence agencies. On the second occasion, it was rebranded as “test” weather manipulation. In either case, the German government reached a point where they feared admitting the obvious. Copies of the news broadcasts have been removed from YouTube to conceal the admissions. We had each video translated by two sources to confirm their authenticity.

We would like to suggest that you forward this article to as many people as you humanly can. Suggest they look up, take pictures, and post them to the internet. When we pull the trigger on these traitors, it will be best to have as much evidence to prosecute them as possible. Also see our article on the Complete Story of Chemtrails.

14 thoughts on “Chemtrails: 12 Reasons They Are Real”