Chemtrails: Why you’re sick this winter 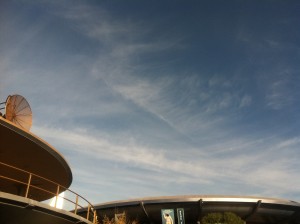 This winter season is filled with hopes of a new tomorrow, but unfortunately loads of chemical trails being ejected from countless planes. Today over Orange County and in particular, Disneyland, planes crisscrossed over the sky creating a bed of fake cloud like structures that drift down on the people infecting their lungs, starving their oxygen supply, and in some cases, pushing terminal illnesses over the point of no return.

We hereby declare that the Center For Disease Control (CDC), the Environmental Protection Agency (EPA), and some extent the United States Air Force are failing the American people on a catastrophic level. When cars in Los Angeles bellowed terminal clouds of brown exhaust, the state of California developed and laid down laws that prohibited cars from destroying clean air, and since the 1980s, the air has become a fraction of the pollution it used to be. Cars over 5 years old have to smog check regularly or they aren’t allowed to drive on the highway. Cars that are purchased out of state have to retrofit emission control packages before being road legal.

On the other front, if one calls the Air Force and reports a UFO sighting, a delegate from the military is dispatched to phone the individual up, gather all information about the sighting, and investigate the occurrence to the best of their ability. So why would the Air Force knowingly allow an armada of planes to eject toxic clouds of aluminum or barium oxide on a population without their knowledge or consent? Is it not one of their prime objectives to protect the skies over America? To date the Air Force has resorted to name calling and ridicule anyone who would suggest that the scientifically impossible match to contrails are anything but safe. When presented with physical evidence of their composition to analyze, they refuse as did the CDC and EPA.

And what about the CDC and EPA? What is their charter if not to protect the air, food, and water that we consume? The basic law of particulates proves that air that is polluted with foreign particles is not safe to breathe and robs the human body and immune system of its fundamental ability to protect against illness. As we noted, they too refuse to investigate and prove the claim that chemtrails are indeed unfounded. Let us repeat that, they REFUSE to study the materials. For to study the materials would force the matter into the public record, and every single serving politician and commanding officer that is involved in such a project would be tried for treason and sentenced to most likely life in prison.

You are sick this year because of chemicals being knowingly dumped on your person. You are not safe to breathe the most natural free resource in the world, air. Winter does not mean that it’s time for the entire world to get sick. It is possible to traverse an entire year without coming down with the common cold, strep throat, pneumonia, or other illness. The elderly and young of the world deserve to live full lives without being murdered by groups that control all appropriate agencies that would investigate and stop such dastardly acts.