We get asked frequently what the purpose of Chemtrails are. The complete story is very devious, and hard for most folks to believe. Nevertheless, we are going to explain it from top to bottom. Before you ask what you can do to help, our answer is this, get informed, and spread this information. Take photos. Post them. We’ll post them for you. We do not track you, or save your contact information. We are simply creating a historical catalog of violations to be used in a court of law once these criminals are brought to a new court run by the people for the people. Let us begin explaining.

Spraying chemtrails accomplishes several things. First and foremost it kills crops globally. Farmers unable to create a harvest are allowed to languish for a couple seasons until visited by salesmen from Monsanto. The Monsanto salesmen asks them general questions about their yield, discovers what he already knows, and tells the farmer that he has a patented terminated seed that “might” be able to solve their harvesting problems. The farmer agrees to try the new seed at either a reduced price or a free trial, and magically the chemtrail aluminum resistant seed grows like wildfire. Not only that, but once sprayed with Round Up (also made by Monsanto), the process of weeding a crop vanishes over night. And in one move, the organic farmer has been turned into a GMO production plant. The harvest explodes, the profits go down, and the orders from giant fast-food chains pour in.

The second objective of spraying is killing off storm systems. This is done over the ocean, over populated areas, and carefully around budding hurricanes to ensure massive output and destruction. The purpose for killing off storms is two-fold. One, the elite of the world want the population to believe that the climate is getting hotter every year, and if we don’t help them convert their massive oil making money machine to their next price gouging alternatives, we are going to die. The second goal is to create a dust bowl not unlike incurred in the 1930s in America. The purpose is to reduce food output, thus driving up food prices, and in the end causing a reduction in world population. All of this by killing off storms.

It should be noted that killing storms on the west coast of any country creates massive warm fronts that collide with massive cold fronts and cause tornadoes and hurricanes. This is a result of geoengineers tampering with Mothernature. For all of those who would discount chemtrail to cloud seeding or weather manipulation, we urge you to remember that none of us have given permission for such technology to be practiced. Tell a family member who has lost a loved one to one of these man-made disasters that it could have been prevented had we stood up to these lunatics. 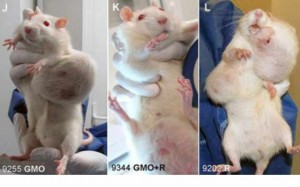 As we mentioned, chemtrails are being used in rural communities globally to kill off farm productions that remain organic. In towns like Chanute, Kansas that are 100 miles from any neighboring city, they have armadas of jets spraying their small farm community until the farmers give up to Monsanto. This is being done intentionally to reduce population.

GMO food causes at least two horrible biological outcomes. This food is fast-food. It is every commercial restaurant that doesn’t advertise otherwise. Grocery stores like Whole Foods devote funds against Prop 37 in California to label GMO products, because they embed GMO in over 30% of their products all the while telling their customers they have no GMO in the store.

GMO causes cancer in lab animals. Now there has been testing of all kinds on animals. We have experience in this field. The level of cancerous tumors in lab rats due to GMO consumption is literally off the charts. Feeding a lab rat simple GMO corn has resulted in horrific tumors unseen by any food previously deemed safe for eating by the FDA. Let us remind you that the FDA is an appointed group of people explicitly bought off by the lobbyists and signed by the installed President.

GMO also causes sterility in lab animals by the third generation. We test on lab rats, because there is a direct association with their ailments and our human responses. We don’t have 60 years to test GMO sterilization on humans, but we are going to safely bet that in three more generations, humans will cease to be able to freely have children even when given the chance to mate willingly. Your families will cease to exist. The knowledge, wisdom, culture, and kindness of your bloodline is being slowly erased from existence. You need to make the decision if being murdered slowly is okay with you. We urge you to disagree.

What happens when everyone gets perpetually sick? They go to medical institutions to get well. This new regiment of being sick every month out of the year, forces citizens to frequent drug stores, clinics, and hospitals. In Southern California, there are more drug stores per city block than Baptist Churches in the south. Each store is plastered with signs advertising free mercury laden shots for every conceivable ailment. The unsuspecting “ain’t no chemtrails” populous pushes through lines like Black Friday to get their veins pumped with brain deadening serums.

What if your plan to reduce world population was primarily accomplished through the eating of GMO vegetables? What diet do you think the elite would promote? What diet do you think Bilderberg Presidents would suddenly switch to publicly? What books, television shows, movies would be promoted to push this agenda? That’s right Vegetarianism and even more recently Veganism. We find it humorous that people who preach these diets have not the slightest knowledge of how the human body works, or what their human cells are comprised of, yet they are righteously convinced that eating other creatures is somehow a sin. All the while watching nature shows clearly demonstrating the life-cycle of all dominate beings on this planet, and eating the oldest creature shamelessly, plants.

A pure vegetarian diet is a cruel joke for those unwilling to do research. The human body demands meat proteins. Every study done on how humans became the amazing creature we are, draw a direct line to change from plants to animal proteins. Half of our chromosomes are meat proteins, yet the genome project would suggest we’re made of 100% DNA. This is a lie, and this is the lie that allows man to be distracted from what makes us brilliant and aggressive towards captors.

The Attack On Organic

If the solution to world population is eating GMO crops, that leaves one unaddressed threat behind; organic foods. Right now legislation is being pushed through our great country to ban all home-grown crops. One might immediately, and naively claim corporate profits as the only motivation, but the truth is far more severe. Once all food is created and distributed and policed by the government, we will no longer be able to safely and reliably gain access to clean organic food. We will have to smuggle food like a drug into a speakeasy to live safe long natural lives.

Right now it is illegal to buy fresh organic milk in green organic states like Washington. A state that houses citizens that pride themselves on natural living has been duped into believing that one of the most natural and healthy forms of drinking milk is suddenly dangerous unless its had all of its nutrients destroyed through pasteurization. Meanwhile dead lifeless bug zapped milk is being consumed by children every single day by unsuspecting parents that graduated from schools that had no education. Our PhD’s of the world have been given their degrees by memorizing and repeating false information, and conducting zero lab experiments to confirm their assumptions handed down by elite control institutions that forbid true knowledge.

So What Are The Solutions?

First and foremost get informed. Study every single claim in this article. Try not to swallow the blue pill in doing so, meaning, official news outlets, books, magazines, all work for them. Do real research. Talk to humans. Ask them if they’ve confirmed anything they believe, or if they merely answered a test question on a piece of paper.

Secondly, we need to identify and track all geoengineers globally. If you work at a university, or have friends who have gained degrees in this profession, we need to track their employment. Where did they go? Who do they work for? Question them. Get to the bottom of why a job exists well within the realm of insanity. We have not as a planet authorized any manipulation of weather. Communistic countries like China should not be allowed to manipulate the weather that we share with them should the “accidentally” create the first hurricane to destroy Japan or the west coast of America.

We need to force the labeling of GMO food everywhere, and monitor the thrown elections around bills to do so. It is clear that the recent (2012) election in California was somehow manipulated to defeat the GMO labeling bill in California. There isn’t a man, woman, or child on this planet that doesn’t want to know that they are eating poisonous food. A defeated GMO labeling bill or prop or measure is a sure sign of voter fraud.

Take photographs of chemtrails. We need to monitor the spraying of chemtrails through photos and location tracking. A farmer that suddenly loses a crop could take your photo into a court of law and prove that spraying was occurring over his land the year he lost his normal yield. A person suffering from asthma could monitor spraying and their attacks. We realize it seems impossible that these criminals will be held accountable, but the truth is they are losing. The mathematical reality is that the world is waking up. The vogue of no longer believing Reuters or Associated Press articles is coming into full swing. Their attempts to use PSYOP agents to create public support is waning.

We can’t change the past, but with global knowledge, we can own the future.