Buy A Gun, Defend The Constitution 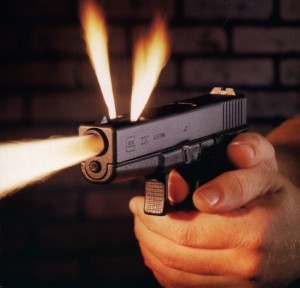 Now is the time for all good men to come to the aid of their country. As The United States of America is infiltrated by corrupt factions that insist on selling out to European banking cartels, it is up to us to guarantee that their illegal mandates do not result in incarcerated citizens. We must reinforce our network of patriots who are willing to risk their lives to ensure that misguided or corrupt police and or military factions fail in their attempts to cease weapons, detain American citizens, and install unlawful checkpoints to further erode our Constitutional freedoms.

To these corrupt factions, the Constitution is the enemy. The Department Of Homeland Security has deemed all United States citizens who attempt to use the Constitution in their defense of inalienable rights as terrorists. We must empower ourselves to resist what is coming. The National Defense Authorization Act is aimed directly at United States citizens and not the fake boogiemen of Al Qaeda.

Inquisition 2.0 has begun, the foundation of recently passed illegal legislation signed by our illegal alien President. The next phase is implementation:  the arrests, the detaining of legal citizens who know their rights, no judge, no jury, no excuses, no shit. We’d better make sure as a nation we don’t end up like the people in the Warsaw ghettos. Look what happened to them.  They didn’t have guns. They hoped the Tiger would eat them last, but they turned out to be the appetizer.

Listen: Buy a gun. Learn to use it. Practice at firing ranges. Buy ammunition. Know your neighborhood. Establish relationships with your local police, so that they will know who you are, and what you stand for; you’ll find they stand for the same thing. For those of you that have never fired a weapon, head to the range and rent a few firearms, see what you like. Go shooting with a friend that shoots. Don’t discount an entry level shotgun as your firearm choice, as they are on average less expensive than handguns…and have one hell of a business end.

Buy a weapon that has a great performance record. Buy a caliber that is common. Buy more than one weapon designed for close quarter combat. View this as your obligation as an American. Do not brandish your weapon. Do not use it to settle petty conflicts. Don’t rack the slide to make the neat “clackitty-click” sound you see in movies to look like a bad ass. It’s a great way to get yourself shot. Keep your firearms out of reach from children. Teach them to shoot when they are old enough to respect the weapon. Leave it cleaned and maintained, ready for action in the event that the enemy cons American soldiers or police to violate their oath to the people. By all means attempt dialogue prior to force, but if Americans are being snatched off the street and dumped into DHS vans, the time will come to declare War. It will be a quick fight, for few will be willing to risk everything to gain nothing.

You’ll find that on the firing range you’ll meet like-minded people, far more than you would with the pizza eating herd in the parking lot at Costco, and that you’re having a great time taking control of your destiny.  Before long you will sharpen your skills with your weapon, become confident with it, feel the security it provides when you’re home at night. It is our opinion that all women should be adept at handling a handgun. You may have to defend your children one day, you may have to repel an attacker. There are plenty of classes for firearms instruction available that cater specifically to women.

Gun up girls. If you live in a “free state,” get your concealed carry permit. It’ll straighten your spine and you’ll sleep better at night. For all of you hipster men that giggle and snicker at the gun culture while you stumble around with an iPad in one hand and a latte in the other; sack up. It’s in your best interests to learn how to defend yourself. You will get eaten by the Tiger if you’re ninnying around like a little girl if the shit goes down. We’ll be addressing your eunuch subspecies in a future article, rest assured.

Talk to your family members who are in the military. Educate them on what they are fighting for, and what they are not. It has been our unanimous experience that no soldier is willing to violate the Constitution. The elite will soon discover this once the orders come down from on high to transform America into a military state. They swore an oath to the Constitution and have far more interest in upholding it than the corrupt gang of 525 on Capitol Hill.

Don’t fall for acts of terror that accuse home grown citizens of becoming terrorists. Don’t fall for the media spin that anyone mentioning the Constitution is an extremist that needs to be silenced. This very idea alone should send waves of nausea through all red-blooded Americans. Understand that in order to make change, real change, we are going to have to gut our nation’s capital. The corrupt puppets of the Oligarchs must go, as Patriots must replace them with ideals that made this country the greatest experiment in human Liberty. We have the choice right now to elect a President like Ron Paul or we can allow the criminals to use voter fraud and their lapdog media stooges to install yet another Bilderberg hired candidate to sign yet more legislation that will make America a living prison.

As long as we’re slamming down the diet coke and existing comatose at the heel of the 55 inch TV’s, we’ll never pull out of the tailspin. This isn’t a movie. This is real life.  It’s happening right now. Sorry it’s happening on our watch, but that’s the hand we’re dealt. The Second Amendment enforces the First, and defends Liberty against Tyranny.

Time to grow up America.