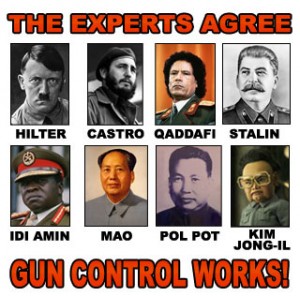 As the elite of Europe attempt to disarm America through false flag shootings, and covert treaties through the United Nations, Americans are faced with a dilemma: how do we ensure the survival our unalienable Second Amendment rights once the Government evaporates into complete and utter tyranny? We believe this can only be done after the elite forces that are trying to destroy America’s Constitution are exposed and removed from power. Otherwise, they will always make a move against the right of citizens to be armed. Always.

Armed societies have flourished throughout human history. In fact, the armed society thrived so well, that only now since weapons have been systematically and incrementally removed, have we started to lose our rights. Senseless deaths have littered our news headlines where a single armed law-abiding citizen could have disabled or eliminated the threat. The recent false flag events in Colorado and Wisconsin would have been single second events with minimal fatalities. Using the example of Colorado’s massacre, the government sponsored gunman would have been shot, unmasked, and revealed to not be James Holmes. Instead, room filled with learned-helplessness and pop-culture movie worship became the sacrificial lamb needed to set the stage for another move against the rights of the armed citizen.

What American citizens need to understand is that we are under attack at this very moment. Our attackers are led by their controllers in Europe, and they mask their loyalty as politicians, military officials, police commanders, supreme court justices, led, blackmailed, and controlled by shadow individuals who tell these traitors what to do and when to do it. The minions believe that they are part of a select few, part of the oligarchy, they want a pat on the head from The Master. It will be news to these traitors once their usefulness is expired and their controllers turn on them. But in the immediate, we have two choices when it comes to dealing with these individuals.

The first option that occurs to most patriotic citizens is to confront them head on in some armed conflict, a guerilla style civil war. This method requires a massive awakening on all levels of law enforcement and military command in order to be successful. Above all, we the people would have to determine what victory means. Europe traditionally steps in to declare victory for the people during uprisings to install their replacement politicians who are already loyal to the bankers regardless if they know it or not. Russia suffered this technique during the coup of 1991 with the installation of Boris Yeltsin. We need to be on the same page as to what our victory will entail. Surely not the broken, corrupt two party system. Surely not a police state. Surely not a debt based economy. We had it once: a Republic, where the law applied to everyone, and Government was our servant, not our Master. There was prosperity and liberty. They go hand in hand. That, in our opinion, is a strong step in the right direction.

The second and more advisable method is a non-violent awakening that starts at the root of the elite’s power structure. The elite gain their power through the manipulation and control of money. There are several ways to undermine this control, some of which you may not be aware.

The first method of manipulating money is the practice of fiat currency. This is where a country surrenders the creation of money to an outside private banking cartel. We in the United States did this in 1913 with the formation of the private for profit bank known as the Federal Reserve. We allowed a network of elite owned and controlled banks to loan us money at interest instead of allowing it to be issued by Congress via the Treasury. The truth is that the elite aren’t loaning us money they have, they’re simply creating it from scratch in a computer and charging interest on that fake money. The sooner Americans understand this, the sooner we regain control over our money.

The second method that the elite use to control the world is through the sale of a barrel of oil, which gives the above fake money its value. Oil is widely perceived as a fossil fuel, which it isn’t. We have explained at length about how crude oil is a natural byproduct of the Earth using atomic matter from the Sun. Once the children of today understand that crude oil is by no means limited, the elite will lose the value of their fiat currency, and thus their control over every nation. It would be in your best interest to read our article, and spread the news quickly. We want green energy just as much as the next, but in the meantime, we need our gasoline to be $.05 a gallon until we can build geothermal plants to supply free clean energy.

Right now America is divided into two groups. A group that has never fired a weapon in their life, and a group that understands the simple power of being able to defend themselves. One group fears every noise in the middle of the night, and risks being a victim of any demented idea that goes through the mind of a criminal, as the other group sleeps with the comfort that should their sacred home be breached, they will have the element of surprise and lethal force at their disposal.

Right now there is a movement from the elite to condition Americans into restricting gun control in the name of insanity. Stories of individuals obtaining guns is the catchphrase of the Summer of 2012. While more police officers kill citizens on a daily basis than all the crazed shooters in movie theaters, the debate suggests that citizens are safer allowing police and military personnel to have unlimited power, when the percentage of soldiers or officers who know the ten Bill of Rights is almost non-existent.

As a free citizen of America, we need to remind each other that the right to bear arms is 100% related to the defense against our government gaining too much power over the people. With drones now put in the skies over our major cities by a President who won a Nobel Prize for Peace then bombed Libya and then used Al Qeada mercenaries to murder their president in the street like a dog, it is time to buy a gun. It is time to get a neighbor who has never fired a gun to come down to the firing range. Let them feel the power of a round of ammo bursting from their palm through a target 50 yards away. Once they hit the bullseye, they will be hooked for life. Help them get their firearms permit, and buy their first gun. Take them to shooting ranges and help them understand when and where to use this deadly force. Teach your children as soon as they are mature enough to do so. Separate fact from fiction, so that the new comers know to never use the weapon in anger.