Before we get started, let us explain why we’re writing this article. It can be argued that there are more important matters to focus on. We don’t disagree. What we do object to is the graffiti that remains a stain on an otherwise great country of America. What we are going to propose in this article is a rise in consciousness about a ritual that goes back hundreds of years. A ritual that should meet its end, and remain unpracticed. The symbols we are going to outline pay homage to the power structures that control us, and by allowing them to continue to exist embolden their resolve not to mention their arrogance.

The controlling elite who own all the major banks in the world, and who therefore buy and sell politicians that control every nation, like to stamp the Earth with symbols of ownership. Now before we continue, let us stress that OnePageNews does not subscribe to any spiritual power or other supernatural attributes of these symbols. We use the word evil to describe their sociopathic intent, and not a mythical being out to get humans. They are merely symbols. Symbols of serfdom and slavery, and the more we as a people worship these symbolic shackles that bind us, the more they laugh a hearty laugh and toast to total and utter control over societies globally. So what symbols are we referring to? There are countless structures that mark their territory, but let us bring three to your immediate attention, and before we do, we know this is tough to digest if this is your first venture into the proverbial rabbit hole, but bear with us. 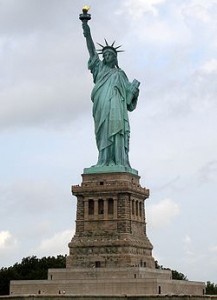 Statue Of Liberty (dedicated in 1886)

There is a reason she is in the Jersey Bay and not on land. America used to have informed meaningful and righteous politicians who fought for America’s wellbeing. Not like today’s complete and utter sellouts who would harvest your baby for a snack if it were legal. Let’s review: we were taught the Statue of Liberty is a symbol of freedom that calls out to European migrants to move to America and take up their dreams. This couldn’t be further from the truth, but lets start at the beginning.

The Statue of Liberty was given to America by the French. Hasn’t that always sounded a bit strange to you? Why would a country that just finished trying to take over the United States turn around and award us with a gift? Was it that they felt guilty, and didn’t want any hard feelings? We think not. The Statue of Liberty goes back literally thousands of years.

The female figure we know as The Statue of Liberty is older than most people realize. She has been worshiped by the controlling elite as far back as 4500 BC. She actually went by another name when she was first printed on currency in the Babylonian times. Her name was Queen Ishtar, or more commonly known as Queen Semiramis. She was imported into Europe once the families of that era migrated north from Eurasia. Soon she was given the name “Reine de la Colombe” in French, which translated reads “Queen of the Dove.” She was not altered in appearance since her first minting some 6,000 years ago, and the bankers of France have worshiped her ever since, and it was these bankers that “gave” a likeness of her to America.

The gesture was meant to accomplish two things: One, to mark the land. France owns America. Two, to overlay onto this symbol a passage that would ring in the hearts of migrants around the world, “Give me your tired, your poor/Your huddled masses yearning to breathe free.” This message was secretly meant to break the back of America. It was meant to invite all the poor and what the elite thought worthless into the new lands and stress her resources and employment potential. It backfired. America turned the onslaught of migrants into a haven of those seeking freedom and who were fed up with the tyranny of cowardice European rule. Nevertheless, she still remains a symbol of ownership by the elite and must be removed. 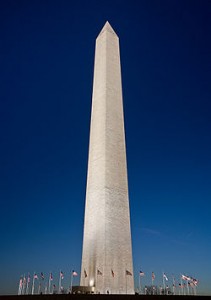 The Washington Monument (dedicated in 1885)

Another controlling faction of America are the Freemasons. These days the Freemasons reign over America is easier to prove given the hundreds of statues, paintings, and other symbolism they built all over Washington D.C. What some folks haven’t yet realized is that the Freemasons are simply an extension of what used to be one of the most powerful organizations known as the Knights Templar. They still exist, but they have chosen to hide their history under the Freemason umbrella for safe keeping (it makes them feel special, don’t tell them).

The Knights Templar or Freemasons took the symbol related to the biblical character Nimrod. The story of Nimrod and the symbolism we’re going to mention has to do with at least one tale of his death. The story goes that he was cut into pieces, found by his wife who attempted to reassemble his body, but could never find his phallus. The legend continues that Nimrod rose to the heavens and joined the sun, and some suggest that he was married to Queen Semiramis and that from this vantage point impregnated her using sun rays that then resulted in a child.

The Freemasons adopted this missing phallus as their symbol of strength. This phallus was then translated into an obelisk, and every geographical location they control by either force or financial means is marked with this symbol, hence the Washington Monument. We would also like to note that the elite love the fact that the citizens of the native land actually participate in creating the structures of worship to them. We slave to build them, and most definitely to maintain them over the years. It is time we cease this madness, and bring them down once and for all. We’d like to suggest that all like symbols be forbidden except to educate the youth on their meaning in museums of ill intent. 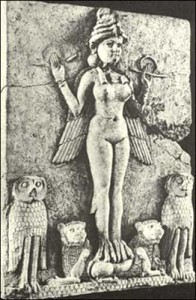 The incestuous journey continues. Legend has it Queen Semiramis had a band of owls who acted as her mentors and advisers. Always by her side, they kept her path tried and true. It is from this ancient tale that we get the images of owls that litter our currency (it’s not a spider), and much of our government symbolism. However, there is one owl that most people have never viewed for it can only be seen from the sky.

Right in the heart of Washington D.C. is a mammoth owl that surrounds the United States Capitol building. It has to be seen to be believed, and we suggest you link to Google Maps and get a bird’s eye view of this stain on our country. It is not a statue or unified structure. It is drawn literally out of sidewalks and filled in with lush green grass and shrubbery. In the belly of the owl contains the wisdom of those who follow its greatest protege Queen Semiramis, or in our case, the leaders who serve the bankers of Europe.

We understand how crazy and pointless this all seems, and it is this exact reason why we would like to suggest that these symbols of control and manipulation and slavery be dismantled. We might be a few hundred years ahead of the masses in this article, but the seed has to be planted. The suggestion has to be made. A free society cannot harbor images of tyrannical control. These symbols must be brought down lawfully by the people as a whole, and not by some maniac acting on is own. The country must vote these objects and symbols out of use, and replace them with certified images of freedom and liberty. New symbols that preserve the concept of a sovereign country with citizens that possess inalienable rights that can never be removed as dictated by the Bill Of Rights. Spread this wisdom to all you know. It is important that we live unpolluted by repression of any kind, even if it is merely symbolic.

Life Is A Conspiracy:
The Propaganda Coma

Why We Don't Allow Comments: A PSYOP Tale
Previous post