The Fraud Of Over Population 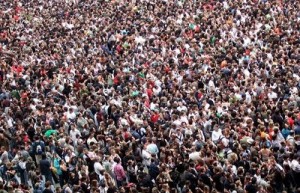 Not A Picture Of America

Is world population a problem?

For many countries the problem is nonexistent, but for some countries the problem is very real. The fundamental problem we have with the arguments for civilized first world countries to halt–or at the very least severely curtail–procreation efforts, is rooted in the law of averages. If a population gains 4% year over year, it will only take 25 years for that population to double, and this is the mathematical reality that some folks worry about.

Countries such as America and nearly all of modern Europe knowingly regulate their offspring count by sensibly keeping their numbers low. We no longer farm land on the whole, have child labor laws, and therefore no longer have children in order to monetize their labor. This is good for natural population control.

Let’s examine the unthinkable idea of regulating the number of children a couple could have. The most basic fear when people hear about population control is the idea that we will have to cease having children. This isn’t the case even if we were over populated and needed to reduce our number. Take for example the goal of sustaining our current numbers. If every couple that decides to have children were to limit their offspring count by two, then the world population would remain the same. Given that many people aren’t interested in children, and some are unable to have children, the number would naturally decline. It is conceivable that a couple with an inability to procreate could give up their allocation to a random pool.

Before we set any limits, it should be explored to see how many people we can comfortably house, feed, and fuel. The elite controlled energy corporations have bought up all the patents for clean free energy, because it can’t be monetized, so how do we know what the limit should be set to? We need to explore the ability to create food using hydroponics. We need to explore geothermal energy. We need to research architectural alternatives to build structures not only into the sky, but also into the Earth, and perhaps out over the ocean. There are many options when it comes to all the factors that catalyze the fears of those who fear monger population growth. However, there is a limit. We just haven’t as a world population decided what that limit is.

The clear source of over population

It is clear that two countries, China and India, contribute a disproportional amount of population per their land to person ratio. Families have children in these two countries, because they are largely still in a third world status with very little of any child labor laws. A family is able to exploit their offspring in a country that suffers from its very population problem. Resources are strained, and no one seems to care. We are often told in America that China kills children if families procreate beyond a certain limit. This is categorically untrue. The only citizens in China remotely regulated are government workers, and their only penalty for having and extra child amounts to a fee of around $150. Families in China are still very large, even in areas where modern society has no means of employing or housing them. It also should be noted that as the elite are attempting to get asinine carbon taxation system imposed, these over populated countries are immediate exempt. For to tax the source of near free wages for giant multinational corporations is to spite themselves the ability to rape man of their right to reap the benefits of hard work.

A fraud being played on first world countries that are responsible in population growth is that we are told that we must compensate for the unregulated. Countries such as Mexico that tie manly cultural norms to child baring abilities are bringing the problem directly into America unregulated, and we would suggest deliberately stimulated. So when you hear professors and politicians lament about how the modern world needs to limit its growth, we would encourage you to reject this notion 100%. The solution does not start in any country that has population growth under control. The problem starts with countries that are shamelessly overlooking their moral responsibility to control their growth verses natural resources.

Why is population control and issue in 2011?

There are obviously several perspectives on this answer depending on whom you consult. Some simply take the appreciating growth curves and see a catastrophe of resource depletion, while others worry about something far more fundamental, CONTROL.

The elite of the world work extremely hard to develop means of controlling the populous at large. When the number of humans increases, that further strains the control apparatus that has been put in place. We believe that given the clear targeting of countries that control their population, it is obvious that someone wants the most highly educated to cease spawning, while those who are still willing to allow slave labor in their societies are encouraged to continue having children. Corporations benefit from next to free labor, while modern cultures have been convinced that earning a living wage from basic jobs such as bagging groceries and fixing roads is acceptably intangible.

So when do we start discussing these issues?

It is time that we start to debate these issues in a public forum. Right now groups behind closed doors are doing the debating for us. Choices are being made based on monetary and political gain. The cards are stacked against modern societies. Countries with population problems need to demonstrate their ability to regulate themselves. Countries who are clearly within their means to expand need to reject immediate sacrifices while planning their own methods of capping their given population. At this point in time, no public population control treaty is being discussed anywhere, nevertheless, programs have been in place for decades to dumb down society, poison their bodies to shorten their lives, and generally make them self-absorbed enough to allow their otherwise worthy genes from continuing to contribute to society.