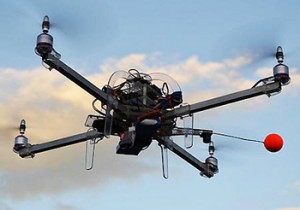 If someone told you that your government wanted to start a program that would put armed drones in the sky, you might start asking questions. Today a “feel good” campaign to make the invasion of your privacy from the skies has commenced. The FAA has formerly come out in favor of hobbyist who want to launch camera laden flying vehicles in the skies over America. As if having your cellphones, home phones, computer cameras, and public streets filmed 24 hours a day wasn’t bad enough, now you can rest assured that your private time in your backyard will be transmitted over the internet should your neighbor be one of these drone enthusiast.

Resist the cover story. Fight to keep America’s skies free. We do not need robotic drones dropping into highway traffic, because Billy Bob ran out of battery power on this UFO skinned helicopter. The Paparazzi don’t need another tool in the arsenal to attack individuals accused of anything that the mass media dreams up. We need to force any government sponsored 4th Amendment violating drone program to stand out like a sore thumb that needs to be lobbed off.

Before you repeat the founding phrase, “America, land of the free,” take a moment out of your day and imagine a country littered with surveillance drones scraping facial patterns from every human on Earth, and feeding those identities into social networking databases to locate anyone who would dare tell you the truth.

.054%: Level Of CO2 In The Greenhouse Gas Layer
Previous post