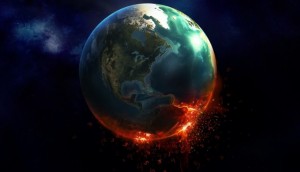 As the elite are struggling to convince a largely sleeping population that the world is indeed not cooling as actual experience has confirmed for the last nine years, fraudulent reports of record heats are expected to come pouring in to create a reality that simply isn’t happening.

It is good to remember how and why Earth’s heat goes up and down. This is directly related to something called sun spots. Sun spots are vortexes not unlike the drain in your bathtub when water spins down into a cone shaped whirlpool. They are called spots because during the time of the spiraling process the number of light emitting photons is condensed away from Earth thus causing a darker signature on the surface. What does this have to do with the temperature on Earth?

Sun spots are part of a two step process. The first step is in the spiraling of the exploding hydrogen surface towards the center of the suns core. Although headed inward it soon collides with other matter that is exploding out from the center, and thus throws this fast moving stream back into space causing something we know as a corona. These giant streams of million degree pockets of sun hurl towards Earth so quickly that when it collides with our Van Allen belts it causes what we know as solar flares and can effect to a minor level, the overall temperature of the Earth itself. This is why scientists know that Al Gore’s global warming fear mongering is a lie. Sun spots are the only thing we are aware of that routinely occur that effect the temperature of Earth. Other catastrophes such as volcanic eruptions can change the composition of the atmosphere, but these are luckily few and far between, and therefore something we do not factor into daily temperature behaviors.

The reason that the Almanac has a prediction of the 150 year ice-age cycle, next due in 2020 is that the Sun is a very reliable mechanism. The vortexes or sun spots occur at fairly regular intervals, and thus can be predicted by even the most laymen of the scientific community.

So as you see 2012 report record temperatures, and as the elite push their draconian carbon taxation program on the ignorant, you can compare each day with the number of sun spots from NASA’s free gallery feed, and test the waters of propaganda for yourself. Know that the weather does change. The sun will periodically produce sun spots that effect the temperature on Earth. One must fight the urge to allow this nonsensical association with the elite’s agenda to repress the planet into the middle ages.

We as the people do not choose the power sources we are given. We should not be taxed on what power choices are made on our behalf. We did not decide to use coal or nuclear. We simply took what we were given. Never forget that. Stop feeling guilty for the decisions made by the same folks who are trying to tax you. They own the power companies, they own the banks that will collect your taxes, and they draft the laws that will continue to destroy what little freedoms you have left. Carbon taxation is part of a much larger plan. As families around the world struggle to pay their basic bills, increasing taxes on CO2 emissions based on lies will force many into the streets leading to their overall demise.

Fight lies with truth. Get informed on CO2 percentages in the atmosphere. Stop repeating the agendas of the elite as if they are your own. You are not being noble. You are not doing your fellow man anything but harm. By all means, be green, but understand for a second that it will take 50 to 100 years to replace all the power sources we have created to date. The citizens of the Earth cannot afford to be taxed into poverty in order to accomplish this goal. Force your country to build a geothermal plant that will remove all emissions, provide near free electricity, and end the multinational power company grip over your own life.

This year, don’t believe the hype.