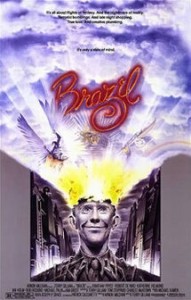 If you have awaken from the matrix of lies and manipulation by the elite of the world, you surely look at media of all kinds in different ways. Films such as 1984, and Rollerball give great examples of what our future might look like if we don’t grow a spine and throw these pasty weak bankers into prisons for life.

We’d like to call your attention to another gem that demonstrates in a comedic genre what the world might devolve to should socialism and bureaucracy replace freedom of choice. The film is Brazil, created by the genius of one Monty Python member Terry Gilliam. He is known for several masterpieces, but we think this film is a great testament to those who were able to wake up before the internet.

The film met with severe opposition once completed due to its tragic ending, which prompted its distributor Universal Pictures to put a hold on the films release. After being tested by Terry himself without studio approval and gaining the award of “Best Picture” by the Los Angeles Film Critics Association, Universal agreed to release a 132-minute version edited by Gilliam.

If you have not seen Brazil, we urge you to rent a copy and have a look. The sheer absurdity of paperwork, process, and how it could reduce to a population scared of their own shadows is remarkable. There is a hero, but depending on which version of the film you watch, the ending could surprise you.

How Planets Are Born, Die,
And Why It Matters
Previous post