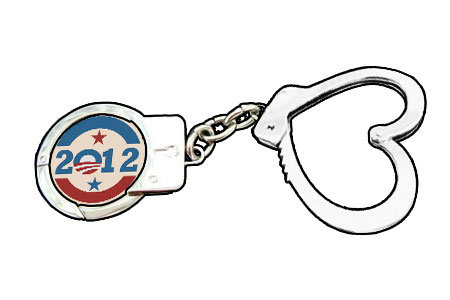 If you’re wondering why a nation of law abiding Constitution following Americans are so silent and content with a President that has done everything in his power to erode the fiber of this country, you may want to become familiar with something called the Stockholm Syndrome. This is a psychological condition in which hostages sympathize with, or feel empathy for their captors. America, at least a good slice of America, is suffering from this condition. And before you instantly click away from this article, because you assume we’re Republican or Tea Party loyalists, think again. We’re loyal to the reality that makes up your life. Our President who ran on a platform of reform, honesty, and change, has continued every single totalitarian piece of legislation put in place by Republican George Bush and those that came before him. In fact, Obama has abused every mechanism of Executive Order and soon United Nation treaties to stab this country in the back until its dead.

So why the Stockholm Syndrome reference? Simple, a political group of sleeping citizens have been willingly duped by a conman. They don’t want to admit this, because their reputation as erudite, well-read liberals is on the line. Rather than admit to the bad judgment, they fold inward, toss up their shields, and actually defend a bad decision, and even worse, a very bad individual that is not acting in their best interests. Some have to resort to religious faith, while others simply love the Shepard Fairey communist propaganda inspired poster that won him a felony for copyright infringement. Regardless of the reason, the Obama nation is a nation of citizens, of captives, a nation of hostages to the lie they want to desperately believe, unable to discern reality from propaganda, unable to admit they have been duped, and unable to see the edge of the abyss on which we all stand.

Carry Overs From The Bush Era

President Bush, the son of George Herbert Walker Bush, grandson of Nazi funding Prescott Bush, third generation Skull and Bones alumni not only presided over the false flag of September 11th, 2001, that plunged this country into tyrannical rule, installed some key legislation that has killed the American way ever since. The first was the draconian Patriot Act. The second was the eaves dropping and child torturing Military Commission Act. These two bills gutted nine of the ten Bill Of Rights leaving America poised to be taken over by European forces through the United Nations (UN) and the World Health Organization (WHO). We also saw the dismantling of the reporting system that monitors the private for profit Federal Reserve bank in 2003. These deregulations led to the black hole that concealed the nefarious offshore transfers of money from Tarp to the European banking cartels while Paulson was on duty.

In comes Barack Obama. The elite called his campaign the “Jimmy Carter” formula. This was also used during the Clinton election. The outsider. The unknown candidate that comes in to save the day. The country was sick and tired of Republican rule and wanted “change.” What they literally got without question, was a reaffirmation of Bush-era tyranny with a giant scoop of the most mind-numbing covert anti-Constitutional executive orders in the history of the country.

From NDAA that makes detaining Americans without trial and possible execution legal, to HR-347 that makes uttering a single word of protest in the presence of the Secret Service a felony, there has never been a more corrosive human responsible for more horrific deeds against this country than Barack Obama, and yet his embarrassed supporters continue to sport OBAMA 2012 stickers on their vehicles.

Now the United States faces more underhanded legislation through the United Nations. As possible plans to throw our country into financial ruin mount, the elite control administration ramps up every aspect of contingency for an angry armed society to fight back. Homeland security vehicles are being shipped into California on a daily basis. Over 1,600,000,000 rounds of ammunition have been ordered to fight “domestic unrest.” And the recent gun-grabbing treaty by the United Nations that should be grounds for gutting their building and our United States membership once and for all is found nowhere in the press. We see stories from the Matrix of NFL football players being fired, and reality show personalities negotiating their next porn release.

The fact remains that Americans are starving to death living on record levels of welfare and government handouts. With this poverty comes the promise to pass government healthcare where high school drop-outs will be between you and your ability to get life threatening medical care, and for some reason the population has been convinced that hospitals will fare better than government-run Post Offices and DMVs. It won’t. The same TSA mouth-breathers will exercise their lack of personal power on those who have struggled hard to make something of themselves. The fact remains that the most wealthy humans on Earth come to America for healthcare, because in a private sector we breed excellence that is rewarded by financial gain. A government-run healthcare system will remove that incentive once and for all. Don’t believe us? Ask a wealthy foreigner why they travel across the world to get major surgery here in the United States. We have conducted dozens of face-to-face interviews with Doctors from Canada and celebrities from Great Britain. The medical emergencies have been so profound that some individuals who have been Knighted by the Queen herself have moved to California due to near death experiences for their loved ones.

Snapping Out Of The Coma

What the Obama followers are unable to do is digest the mountains of evidence that their knight in shining armor is little more than a puppet savagely lashing the American way of life. To date, Obama has never been debated on these issues, and you won’t see his pretend opponent Mitt Romney come close to these pressing matters during Presidential debates. The only hope this country has is to start accepting the fact that reality as it is explained to you is not predicting how things actually occur in this world. What should be the easiest Presidential landslide in the history of Republican rivals is being played as an insurmountable obstacle of pro-Obama sentiment.

If you are an American, it is time to snap out of the propaganda coma. You are being lied to on such a level that it’s nearly impossible to isolate a single category of life that isn’t riddled in conspiracies designed to destroy you. One has to exert great effort to attain healthy food, clean water, clean air, a decent education for your children, a good paying job with retirement prospects for your future, good healthcare for both children and adults, and a financial system that isn’t designed to destroy your family’s wealth beyond death. The world is against you, because we have had a generation of citizens who were duped into thinking that everything they were told was the truth. These faith-based tales of “how the world works” are littered with a complete inability to predict any event in the future.

We urge you to read every single article on this website until you see what can’t be unseen. Realize that our information gives you the power to make sense of the world, and most importantly PREDICT the future. You will no longer ask why your politicians continually do everything to hobble the Constitution. You’ll realize that hearing the Star Spangled Banner is actually the sound of a dying voice calling out to be rescued under the pile of European attacks. We don’t need another two-party President. We need a revolution of the mind to renew the greatest experiment in freedom the world has ever seen.

Above all, after reading this article, don’t tell another human being that there is nothing you can do. You can spread this knowledge to heighten the frequency of freedom until it becomes the preferred taste in every humans soul. Let your mind eat healthy information. Read words meant to save not only your body, but your mind and soul as well. Time to wake up.