Panetta Plays Cliche Threat Card: Pay Up Or Else 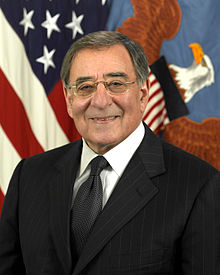 We want to draw your attention to an age old scare tactic that is being played today. Decrepit Defense Secretary Leon Panetta is passively threatening the American tax payer that if we dare reduce the spending for a bloated military industrial complex, that “bad things will happen.” These bad things aren’t actually going to come from outside sources. Panetta and his banking cartel controllers will drum up techniques that will put American soldiers in harms way thus proving is point.

This disgusting tactic of military threatening society has to be stopped, and in the time being ignored. The United States military has more than quadrupled since September 11th, 2001, and all the while having claimed victory over every conceivable FAKE enemy that was blamed for the event. A famine stricken nation like Afghanistan is not going to produce armies of airborne soldiers to drop in on middle America an kill your children. We are more likely to be killed by Attorney General Eric Holders guns for drugs program here at home.

These old pasty men need to be removed from office as they are the embodiment of criminal factions who have infiltrated the military at the highest levels. They use their book of tricks to manipulate us into killing “our” children while theirs go to Harvard, Stanford, and Yale and start off investment bankers before moving right into their father’s positions in military.

We say REDUCE the military until peace is the only thing they can contemplate. Stop feeding the war machine for European banking cartels to fuel more wars fought by America’s youth. Purge the politicians who support them and the officials that facilitate these military IMF agendas. If nothing else, repeat this pattern of deception to your friends until they understand that the only group that is going to actually attack America, are the groups that get their funding cut.

Al Qaeda is not coming after you. An Afghan warlord who grows and sells heroine to the CIA isn’t coming after you. A drug cartel from Mexico means business. Let’s secure the criminals here at home who wear black suits, go to CFR meetings, and secretly attend Bilderberg Group meetings violating the Logan Act.