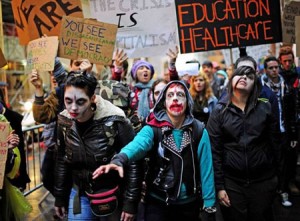 The recent and sudden string of protests aimed about raising awareness around the financial war on America by the European Bankers is now under attack from the same nefarious organizations they’ve been fighting. Paid undercover mercenaries that are willing to take a buck for undermining America are deliberately making a masquerade of the movement by dressing in absurd costumes, and filming each other while making ignorant comments about the issues. The goal is to attach a stigma to the movement that the general reality-show sport score obsessed American will see and shrug off before paying attention to its original purpose.

Granted any movement that grows in number will have legitimate supplies of ignorant people who simply don’t know the issues, but the more that violent outbreaks litter the news media, one can be sure that these are undercover cops that dress like civilians and march in the face of the comrades only to be detained and released back into the wild. The news media gets their 10 second clip, headline, and the movement is falsely accused of something unrelated to the goal, and thus the police are then justified and backed by the people to remove the protestors by force.

Avoid falling for the trap set by the infiltrators, and do your best to spread the word about these tactics.