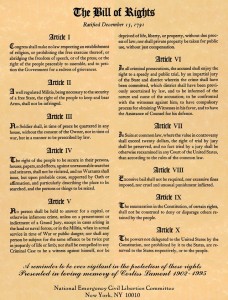 Our ancestors need to be proud of us. As they faced tyranny, oppressive government control, and out of bounds taxation, they made a stand against the iron fist and fought to break free. We must do the same.

Now here we are, 220 years after the ratification of the BILL OF RIGHTS, seeing the heinous NDAA bill passed by congress. Only in a country so neutered by its pleasures can the public be so largely unaware that their government has turned against them. This is a grab at total tyranny, allowing in writing, in law, the US Military to prowl the streets, abduct American citizens under trumped up charges of “terrorism”, and toss them into some dark prison hole never to be heard from again.

The East Germans dealt with a total foreign takeover and a serious full throttle Police State at the hands of the Stasi. Even they would not have put up with being groped at the airport by nitwits. They endured the destruction of war, the horrors of starvation, the insult of foreign occupation and total isolation. They managed to break free, topple the government and demand their freedom. How did they do this?

Largely, it was because the military refused to go along with the establishment any longer.

To our friends in the US Armed Services: your job is difficult, but your loyalties are clear: you swore an oath to defend the Constitution against all enemies, foreign and domestic. Well, we have a serious domestic enemy: the gang of 525 and their Executive figurehead that thinks they can run roughshod over our founding documents and have zero accountability for doing so. When our own government and its enforcement tentacles (Homeland Security for example) begin to label patriots and veterans returning from the wars they started as potential terrorists, you know right away that it is THEY that are the bad guys, not us. When they pass a bill that will allow Americans to be whisked away to shadowy prison camps without their right to due process of law—guaranteed in the Bill of Rights, and the president signs it, it is clear that they have declared war on us. Uphold your oath. Do the right thing. Do NOT enforce these unconstitutional mandates and turn against the greatest nation ever built, and help us prevent it’s avalanche into total tyranny.

This is very serious. Be on the right side of history. The world is watching.