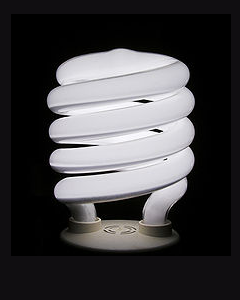 What do you do when you have a patent on a product that the world uses every second of every day, and it runs out? Answer, you create a new product, manipulate the sentiment towards your previous product, and actually legislate the population into having to use your new product…by outlawing the old one. Sound impossible? Well, it isn’t. If you’re wondering why you’re being pushed into having to use Compact Fluorescent Bulbs by law, this is the reason why. Wait…it gets funnier. It’s happened before.

Some of you might remember the good old 1990s and the global scare of the “shrinking ozone” layer, a cloud of gas that hovers over Earth’s southern poles that protects us from the Sun’s harmful rays. Well, we’re here to tell you that the entire thing was a sham. The ozone layer was portrayed as the valiant defender of the Earth, performing the Van Allen Belt’s job of shielding us from the more lethal elements of the sun. Another, and more important lie as far as DuPonts interests were concerned, was that the ozone layer guarded us against a chlorofluorocarbon halomethane called Dichlorodifluoromethane (R-12)…or it’s more common name, Freon.

Dichlorodifluoromethane had already been in employment for decades in the refrigeration industry. Originally patented by DuPont and labeled “Freon”, this product continued in use until 1979 when the United States slapped a ban upon it. Guess what year DuPont’s Freon patent ran out. 1979 you say? You got it. By 1986, DuPont had a new line of products to replace its coveted Freon, and soon joined the PR blitz to demonize it, as it was now being made by dozens of companies under different names. DuPont wanted to recapture their pull on the industry and thus we got new regulatory restrictions on CFCs–as if they were the demons who ripped holes in the ozone. The truth of the matter is that DuPont just lost their exclusivity and was looking to crack down on their competitors. Well, the ozone layer crisis faded from the headlines and sitcom scripts of the day, so the public stopped caring. DuPont was given their second chance, and we await their replacement as soon as their current patents expire.

Now comes light bulbs. If you manufactured light bulbs and saw how DuPont pulled one of the great cons of the century, wouldn’t you want some of that action? But how do you get an entire planet to demonize a light bulb? No simple task. Enter globalist stooge Al Gore and his band of sycophantic, groveling liars. The weapon of choice? A multi-trillion dollar tax scheme engineered to enslave an entire planet under a falsified guilt trip that carbon in the atmosphere actually heats the Earth. The connections were sold as simple truth: using incandescent light bulbs uses more energy than these new snazzy CF bulbs, therefore you’re contributing to the evil carbon monster that’s going to destroy the world.  People have been so neutered and dumbed down and brow beaten by the injection of propaganda at every level of media, that they never even questioned the statement. News, talk shows, sitcoms, movies and TV dramas all illustrated the carbon scare with religious dedication, and before we knew it, the public was parroting the talking points without ever bothering to check to see if it was true. That’s how public opinion is built: utter information market saturation. The result: the standard, tried and true reliable light bulb has been outlawed without any significant public resistance.

Ever notice how you rarely if ever replace a bulb inside a major appliance? The reason this doesn’t happen is that appliances utilize bulbs with more robust elements that last 10 years before burning out. Appliance specific bulbs barely draw power or effect an electric bill, yet we are being told that incandescent bulbs are drawing too much power and creating too much carbon. So the strategy to fix the problem is to replace clean vacuumed light bulbs  with the new design: the Compact Fluorescent. And it’s not like the CF bulb was invented by the kindly tinkerer in his garage working for the better of humanity. These bulbs contain Mercury, a known neurotoxin, and have to be handled with great care when they are damaged or broken. Anyone who breathes the Mercury vapour from the bulb could be in danger of developing life changing illnesses. Also, it’s a lie that the bulbs are more energy efficient. Testing has shown that there is a high failure rate within the electrolytic capacitor. They are cheap to make, sell for far more than your incandescent bulb, and can be toxic. All the more reason to push them on us, don’t you think?

You need to reject this ridiculous assertion. Normal light bulbs do not cause any significant draw on power plants. Power plants expelling carbon do not effect global warming. And what of other systems like game consoles? PS3s? XBox 360s? These machines add tens of dollars onto every household who leaves them running. Where is the cry for true power curbing? Oh right, these machines are used to make killers out of children. To train them to lust for war, so here the policy makers will allow an exception. God forbid a child read a book. Grow a conscience. Love a neighbor. Lust for peace.

Keep your bulbs. Burn brightly. Light the way for others.