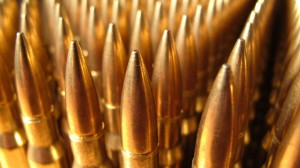 Didn’t you hear? We have TERRORISTS in our country again! Get out your pocket change and get down to your local Walmart and buy as many guns and ammo as possible. We have an invasion on our hands. Didn’t you see the news? Them Saudi’s are attacking us again! Can’t wait to invade Afghanistan again. Isn’t that what we do when the Saudi’s attack us? Like back in 9/11 when 19 Saudi hijackers slammed planes into America? We go after them Taliban who cut down our CIA drug fields, and dare to sell oil to the Russians who aren’t under the control of the IMF and World Banks.

If it’s good enough for Attorney General Holder, it’s good enough for us! Get yourself some AR-15s, 10 gage shotguns, a nice Glock of your choice, and stock up on ammunition as quickly as possible. If we’re going to be scared, let’s be scared with giant ammo dumps in our homes. We have to keep ourselves safe!

On the other hand, we might just need these supplies to defend ourselves against gun grabbing domestic police traitors. Either way, it’s good advice.