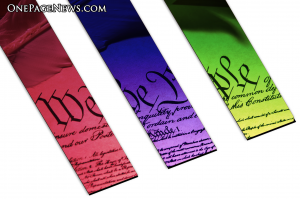 For those of you soldiers, policemen, and politically minded individuals in the world, we have one question you need to be asking your President at all costs:

“Since you’ve been in office, is the United States Constitution stronger or weaker?”

For every soldier who’s had to carry a dying friend out of battle, to every police officer who has had to search for the guiding principles to do your job, the answer to this rhetorical question should be obvious. It’s an answer that lacks any political affiliation.

The list of Constitution violating pseudo-laws stretches for miles. What started out a Patriot Act turned into the Patriot Act 2.0 with more jurisdiction to invade the privacy of every human on Earth, not just Americans. The Military Commissions Act that legalizes 4th Amendment violating eavesdropping and child torture. The New Years eve signing of Executive Order NDAA that allows Americans to be detained without trial. The 1st Amendment gutting HR-347 that makes protesting in the presence of the Secret Service a Felony. This year we’re seeing the direct assault on the 2nd Amendment, and the legal immunity of food poisoning companies such as Monsanto.

There is without a doubt one clear answer to this question. Regardless if you’re a Democrat or a Republican or anything else, America is weaker, and all we have to show for it is tens of thousands of dead soldiers. Where an armed teacher could have prevented the deaths of 28 children, our demonization of self-defense allows anyone to take life the minute they decide to disobey the law. If our President has his way, we’ll all lose those rights permanently.

We strongly believe that this simple question will force an answer that cuts through the divide. Pose this question as often as you can, for the answer is unanimous and powerful.