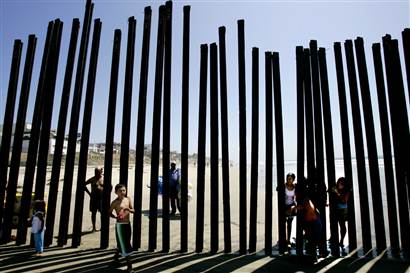 Right now, at the time of this writing, the US Border Patrol has been ordered to stand down and allow..just roll over and allow…a flood of Central and South American migrants to flood over the southern border with zero checks and balances, zero administration, zero enforcement of the federal laws that were set in place to actually secure the US border.

Once the people arrive, the Border Patrol agents are handing them travel vouchers (there are some reports that these illegal aliens have already procured them prior to entering the US), feed them, change their diapers, and arrange bus travel for them to destinations deeper into the US interior. The arrivals agree, it is said, to appear at a US Immigration court for a hearing within 90 days, but the chances that any of them will adhere to this is next to nothing.

What is the demographic of the migrant flood? Largely unskilled, uneducated, poverty-stricken, desperate peasant class citizens are the ones encouraged by their own governments to flee their home countries and emigrate to the United States. They are told they will get a free ride here, the welfare carpet will be rolled out, they will receive drivers licenses and voter ID cards, and of course their children will not have to worry as the US nanny state will care for them. They are also reminded that if they give birth here in the US, the child is a US Citizen by birth, and the chances of the family being deported drop even lower than they already are. All of this is by design, all of this is on purpose. This is not an organic outbreak of immigration, as if some terrible disaster or political upheaval in Central America has sent desperate people fleeing in terror. THEY WERE TOLD TO COME HERE AND THAT ORDER CAME DIRECTLY FROM THE UNITED STATES.

So the question becomes of course, why would the US stoop to such a suicidal move as to abandon its border and allow a wave of poverty across. What it boils down to is that the controlling force of United States policy is GLOBALIST, not American. The difference is significant, as the Globalist does not identify himself as the citizen of the specific nation. Their mission is utter world dominance, full spectrum dominance, to be achieved through the vast accumulation of wealth by whatever means possible. It is in THEIR interests to break the United States from within. The nation can not be taken down externally, it must be crumbled from within. Globalist agents in high places of government, useful idiots that parrot the ideology of the mega-wealthy Elite whose ultimate goal is a one world government, a reduced human population, and the ultimate dream of transhumanism, where they delusionally believe they will be successfully be merged with AI life extension. Yes. That’s crazy shit.

The US must be dismantled through financial means. As the world’s powerhouse economy, the tear-down has taken decades, but the endgame is certainly within sight. The Cloward and Piven program is in evident play here: tax and burden the welfare system to the point where it shatters.