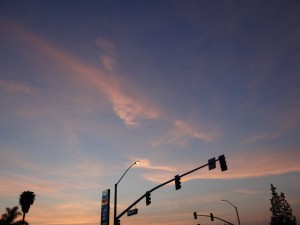 For the last several years chemtrails have ceased their spraying by the end of May and begin again in September or October. The reason for this pattern is that chemtrails make the population sick. An entire population getting sick in the summertime would raise questions about why.

Some people think the sudden loss of trails in the summertime is due to the temperature that would chase away “contrails” that are ice crystals that form behind a normal plane. This isn’t the case for Orange County California. When Walt Disney researched and chose the location for Disneyland, he settled on Orange County California due to its extremely stable weather with very little rain. For those of you who have never been or never lived in this area of the world, you should know that our summers come very late in the year. June is typically a month virtually identical to the months March through May. Our temperatures are roughly the same, and in some cases even colder and wetter than previous months.

However, the month of May does kick off the season of summer, and with summer is the conclusion of FLU shot campaigns that fill your body with deadly mercury poisoning, and Theraflu commercials convincing everyone they need to load up on over the counter meds. If a population was saddled with this regiment over a summer season, questions would start to raise. As the temperatures rise, the synthetic spraying of toxins would contradict the cover story of contrails.

Should they decide to break the cycle of non-spraying summers we will be there to capture their planes flying from San Diego to Ventura. We encourage each and every one of you to look up into the sky, study the trails that follow airliners. Use your cell phone or digital camera to track their spraying and send us your evidence. When they least expect it we will haul them into court with conclusive physical evidence that indeed these are chemical laden trails from non-commercial flights poisoning an entire population year after year. Chemical samples taken from the sky, photos of planes with no markings, and years of spraying techniques and schedules will send the scientists and military individuals sworn to serve and protect to jail for life.

Be a part of history. Clean up our skies. Protect your family since our military won’t.

1 thought on “Chemtrails: About To Conclude Spring Spraying”