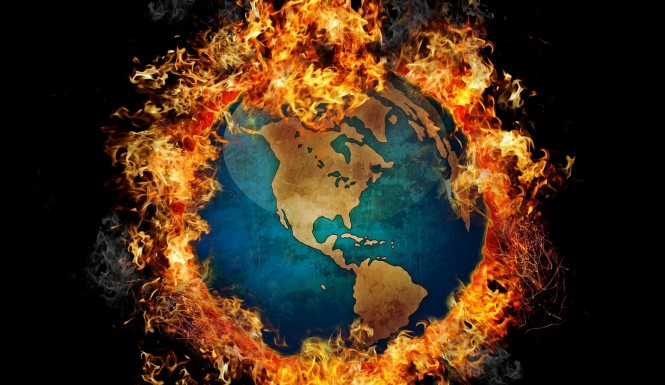 Even the best in the business get persuaded to believe in things that are repeated enough. Global Warming, now named Climate Change, because of its obvious lie to the world is one of these horrific tales. We have found that most people deep down inside know this is a scam, but the utter pressure from do gooders who lack any basic scientific backgrounds can’t weed through the pier reviewed documents that claim otherwise. This article will empower you forever to prove that it is indeed a lie, and that the sources you get that the temperature is rising all over mother Earth is either a lie or a temporary manmade alteration.

What causes heat in the atmosphere?

The atmosphere is warmed by water, not carbon. The amount of total carbon in the atmosphere averages .054%. That’s a fraction of a single percent if you’re not good at math. Carbon does not have the atomic properties to harbor heat, and that’s a fact. We make objects about of carbon fibers because they are stable in this manner. They don’t make nose cones on jets out of fiber because they consume and hold heat. That would be stupid. Out of this ridiculously low amount of carbon, man can only be blamed for 5% of the .054% of carbon in the atmosphere, so in the end, even if the scientific facts about carbon not holding heat were wrong, you couldn’t do anything about it anyway.

The first assertion of Global Warming (yes, we’re going to use the original lie name for this theory to keep you on track) is that we the people chose the energy sources that we use, and that it’s our fault that these choices hurl carbon into the atmosphere. Now carbon is a bad particulate to be ejected into our breathing supply, but so is aluminum and barium oxide, and the governments around the world are dumping that on us in megatons. We at OnePageNews would love nothing more than to see all carbon pollution caused by man to be erased, but not at the cost of a lie like Global Warming.

There are two man factions that are guilty of polluting this planet with amazing amounts of carbon: third-world countries like China and India, and corporations that are funded by the elite bankers of Europe. So, let’s take a quick look at what pressures are being put on them to stop….computing…nothing. Nothing at all is happening to them. In fact, China and India have been deemed exempt from the only global drafted piece of paper trying to curb carbon emissions, better known as the Kyoto Agreement. That should tell you something. The bankers make a lot of money by exporting your jobs to these two countries, and you can rest assured this exemption will only continue to South America and Africa once they’ve set up shop in those regions. As of Spring 2014, the only individuals pressured to change their carbon emissions are first-world countries like America and Europe. That’s funny, because our emissions are the lowest in the world.

So if you want to buy an electric car, you’re going to be taxed with a higher price simply because it doesn’t use oil. Why? Because the same banks who control the world make the profit from your car and your oil. So if you’re not going to buy their oil, they’re going to stick it to you during the car purchase. Why else would a car company collude with an oil company? They don’t own oil pumps right? Oh, but their owners do, and this is where you can start to smell the stinking piles of shit in this Global Warming fear mongering.

If you’ve been paying attention to the news during this last year, you’ve heard all about the frakking method of extracting combustable materials from shale. You’ve long been indoctrinated to believe that we’re running out of oil, and that natural gas, one of the most abundant resources on planet Earth is running out. The truth is that the alternative facts would waste the value of oil in a heartbeat. If we drilled off the coast of Alaska, Scotland or Brazil, we’d have more oil than we’d know what to do with, but since the value of every monetary unit controlled by the elite banks is valued by the sale of a barrel of oil, it’ll never happen.

The truth is we have fully functional blueprints from the 1950s about Geothermal power plants that do not bring toxic gases to the surface. They could be built to tap the Earths infinite mantel warmth, and generate as much clean electricity as we’d ever need.

So you’ve heard all about this warming of the atmosphere and the ocean right? Just where do you think that data comes from? Have you ever looked into how these numbers are derived? Do you think there is a single agency that isn’t sponsored by big banking that’s gather data to counterbalance the Global Warming claims? Of course not. The only people worried about the temperature anywhere are those trying to push this agenda. There is no profit in sitting around gathering temperature data unless you’re selling it right into the groups pushing this lie, and how much do you think they’ll pay for data that proves them wrong? Right, nothing.

There are no deep sea sensors taking readings that are independent. The thermometers that test city temperatures have been moved into the concrete islands where readings are catastrophically higher than actual temperatures. If NPR, Reuters or Associated Press articles are your only sources, and check it carefully, because 99% of all news is, then you’ve been duped categorically. It is important you stop pushing fear mongering data that will result in the ultimate enslavement of man by the bankers.

The dark truth about energy and population growth

One fact that the late Michael Ruppert so brilliantly pointed out is that since man discovered oil, the world’s population has skyrocketed to six times its previous levels. Energy afforded many luxuries that led to more babies through the growth of individual countries. The flip side to the equation is that we know that a population that is educated, does not multiply as much, but we also know that education leads to knowledge that could threaten the stranglehold the elite bankers have on the population. So this diametrically opposing forces cannot resolve themselves, so they have chosen to crash the energy market to create horrific conditions to reduce population through starvation, sickness, and a lack of strategic resources to live.

So if the world ever broke free from our controllers and wanted to implement these alternative means of generating energy, we would have to simultaneously begin educating individuals globally to one, get along, and two, find value in their individual paths in life, i.e., stop attaching child rearing as an exclusive means of valuing oneself. We’ve written careful articles on population control if you want to know our plan for reducing without draconian measures. Just remember the elite get their way quicker than most, and therefore want a risk free method of ensuring complete victory while maintaining their control.

Greenpeace isn’t the only one, but it doesn’t take more than ten minutes of research to confirm that green groups around the world aren’t protecting us from anything. They’ve largely been co-opted by the bankers pushing for Global Warming. After all, the founding members are gone. Patrick Moore, and ecologist who helped create Greenpeace has done his homework. He wanted to know if it was true, because nothing would motivate him more than to know the world was about to end due to Global Warming. He discovered it was bullshit and pulled out. We salute his bravery in the midst of all the pressure to concede.

What would happen of Michael Ruppert’s fears were true?

If carbon did indeed have the ability to retain heat, which it doesn’t, ending any manmade contribution to carbon emissions would be a damn near overnight plan. Let’s review:

The fact is nothing like this is happening at all, and don’t you think the end of the world would mandate this behavior if it were true? The elite have to live in this world too, and if you think they’re going to live in Iron Mountain for the next 150 years, you’re out of your mind.

Why Global Warming was invented

The real reason for the Global Warming alarmist is many fold. First and foremost, the elite want off oil. It’s a messy business, and they don’t enjoy drilling it offshore. It was fun when it floated on the plains of Texas, but that time has long since passed. Given this reality, they need us the people to feel guilty about their choice of energy. They want us to pay for it, because if they had to spend their money, they’re infinite coffers would run dry, and they can’t lose control of their money, nor expose it in any way. They have you thinking they don’t exist let along that they live in some moderate level of wealth.

Secondly, they noticed what happen when oil catalyzed world population. They want the numbers down. Way down. Like Georgia Guidestones down, and debuting a quick solution to Global Warming is only going to cause another explosion, which they want to avoid. So control is of the utmost importance. They want to ensure that before they give us the next utopia, of which you can be sure they’ve planned, they want world population closer to 500 million, probably way lower. They’re trying to make this an orderly demise. A logical demise, so that their nefarious plans are never revealed. They want world population reduction to feel like an evolutionary process, and not of their hand.

Through carbon taxation, every man woman and child will be for the foreseeable future, controlled by bills that will accrue as a result of being alive. Obamacare is only the beginning of “existence tax.” This was something that old Earth knew all too well. You exist, you pay Caesar. You don’t? You die. Well we know they control the majority of jobs in the world. They conspire to shut down competitors until the mouth breathing citizens of the world only shop from the European owned and operated Walmart.

If we don’t kill this virus thought known as Global Warming, we’re going to lose the last two thousand years of human evolution. Our freedoms will pale in comparison to times when human sacrifices were a standard mechanism of fear and persuasion. And if this characterization sounds extreme, then we dare say your understanding of the problem is in its infancy stage. Get educated. Read OnePageNews thoroughly, and you’ll have the ammo to break free forever of their plans to destroy humanity.