…And The Fourth Reich Award Goes To: Barack Hussein Obama 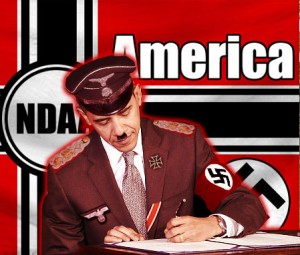 As promised, this Christmas season brought us another advancement in the tyrannical destruction of America’s liberties. This has been a tradition of the elite for centuries. Nearly every piece of legislation passed that has eroded the United States Constitution was passed from December 20th to December 31st. This year was no exception. Barack Hussein Obama just stabbed his country in the back with a dagger that runs through the fabric of freedom and into the hearts of everyone who would dare shed a tear during the National Anthem. Under the absurd notion that America was attacked by Al Qaeda, Obama signed the National Defense Authorization Act (NDAA), which is publicly touted as a “get the bad guys bill”, is aimed directly at alternative media sources that would dare conflict with mass media product. The Homeland Security Lexicon that states very clearly that anyone who does not accept the profit based mass media as reality is deemed a terrorist, can now be held against American citizens.

For all of you trying to desperately hang onto your notion of a two-party system, your jig is up. No one on the right complained. No one on the left complained. The mass media virtually ignored this blatant attack on America. And now every single American can be detained without due process, and murdered by ignorant soldiers who think they are doing their duty in cleansing their country of true patriots. And before you lecture us about the “statement” that Obama signed claiming to never use this law against American citizens, let us quash your fragile need for hero-worship with this simple reality: Obama’s word is worth nothing. He is a consistent and perpetual liar. His statement has no legal precedence. We will be detained. We will start disappearing. There will be no record of our whereabouts. There will be no public trials. This isn’t a repeat of the McCarthy era. This is a repeat of NAZI Germany circa 1935. The ignorant “hope and change” mantra has led this country into full-blown tyranny of the most evil kind. The wolf will always come at you smiling before he feasts on your blood.

The print media lies to us. The television lies to us. The movies lie to us.  The truth is right out here in the open: the corrupt rulers are showing their hand, what they’re all about. They don’t care about us or our rights, and they are preparing to make their move against us as the economy falls into a snarled pile like Building Seven.

We suggest you use your last moments of freedom to exercise your Second Amendment rights. Buy a firearm and learn how to use it before troops appear on the streets–or worse–knock down your door. And when we see these traitors trying to haul away American citizens who’s only crime is exercising their First Amendment, we will free you from your captors using whatever means necessary. We will NOT live in a prison. We will NOT live as slaves.

For all of you who wondered why it matters whether or not our President was born in America, this is it. An indigenous American has a loyalty to his own soil, the people it nurtures, and the ideals that create a great society. A sociopathic, teleprompter reading, compromised sellout born in Africa does not. A man whom the media claims was a Constitutional Lawyer, does not. There are reasons why we have mandates for being President. The cadre of clueless Obama lovers and apologists have allowed their media-fueled hate for conservative America to cajole them into installing a man who will do anything for status, temporary relief of the imagined guilt that all white people are racists, and a moment of perceived power. It is time for a real change, not a repackaged, rebranded pile of Globalist propaganda.

Our nation is mortally wounded, and she is desperate for her true citizens to save her from bleeding out in the streets. We have to use their weapons against them: Facebook, MySpace, twitter, talk radio, any social media platform that is corporate controlled. Knowledge is power and these outlets need to be bombarded by the knowledgeable patriots to spread the word of Liberty and Personal Sovereignty. They will try to discredit you, make fun of you, call you a “tin foil hat” kook. Just come right back at them with the truth, and edifice of deception WILL FALL.

It’s time to elect someone born on true American soil who will fight to restore our Constitution before more is done to kill her essence. The Ron Paul message is on fire right now, especially now that the tyrants have shown their hand with Obama signing NDAA. Hit em. Hit ’em hard goddammit.  Use their disinfo weapons against them.

It’s on: Liberty or Tyranny. It’s an exciting time to be alive and be part of history. Our future is not something to be put off until later. Spread the word!

Ron Paul Is The Only Choice, Don't Be Stupid America